Antibiotic Resistance In The News 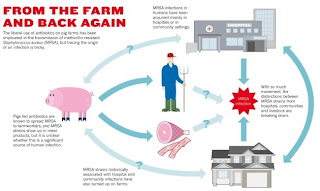 One of the topics I try to stay abreast with, since it is so serious for public health. And we could solve it easily by legislation that would limit the use of antibiotics at farms, especially for pigs. It has been done in Sweden and Denmark, and the entire EU. If we do nothing? Well, a simple ear infection may no longer be treatable, and you may loose a child.

We could all solve it by stopping to eat pork, ham or bacon, but that is another discussion. As for myself, I will stick to that option. It is called the precautionary principle. And it is the more healthy choice, anyway.

There are almost no new antibiotics introduced. Too expensive, too difficult to develop. One of the most recent ones is Carbapenem, but a new scare is showing that even that last resort may be becoming useless. Meropenem is another last-resort mentioned:

Here’s some back-story: CRE stands for “carbapenem-resistant Enterobacteriaceae.” Enterobacteriaceae are a family of more than 70 bacteria which share the characteristic of being gut-dwelling (“entero”); they include Klebsiella, Salmonella, Shigella and E. coli. Carbapenems are a “last-resort” family of antibiotics — imipenem, meropenem, doripenem and ertapenem — which are used against these bacteria when they have become resistant to other drugs. (Carbapenem resistance is conferred by a number of different genes and so sometimes goes by a number of other acronyms, including KPC, VIM, OXA and the “Indian superbug” NDM-1.)

CRE tends to attack in ICUs and other critical care, and also in rehab units and nursing homes. That is for several reasons. First, because patients in those settings are uniquely vulnerable to infection, not just because of their illness but because the protective barrier of their skin has been breached by ports and catheters, and also because they are visited and touched by a lot of people. Second, because they are likely to be receiving heavy-duty antibiotics which put the bacteria in their bodies under evolutionary pressure. Third, because those drugs plus others cause diarrhea, which spreads gut-dwelling bacteria into the air and area. And fourth, because those bacteria are particularly good at surviving on the kind of surfaces — plastic, glass and metal — that you find in health care.

Living in Japan, this is also getting serious, with news from South Korea that resistant bugs are now in the region:

According to The Korea Centers for Disease Control and Prevention, a variant of the Carbapenem-resistant Enterobacteriaceae, or CRE bacteria, has entered the country via a Korean patient who had spent time in an Indian hospital. Since at least 2007, India has been a nexus of CRE occurrence. As seen in the above infographic, it has taken only thirteen years for a mutated version of the original bacteria to make its way to South Korea.

Several months ago, the director of the US Centers for Disease Control and Prevention announced, “We have a very serious problem” with “nightmare bacteria,” and the chief medical officer of the United Kingdom concured only a few days later, describing CRE as a “ticking time bomb”. To quote a Wired article:

Both public health chiefs were talking about a form of antibiotic resistance that is relatively new, and has suddenly emerged as much more serious — yet that the general public, and even much of the medical establishment, knows relatively little about. The acronym for this resistance is CRE, for carbapenem-resistant Enterobacteriaceae; breaking it down, that’s a family of gut-dwelling bacteria, a very common cause of hospital infections, that no longer respond to a group of last-ditch antibiotics called carbapenems.
Because they are effectively untreatable, CREs are very serious — as many as half of the patients who contract these infections die from them — and they are surprisingly common. In the United States, they have been found in 42 states to this point, in more than 4 percent of all hospitals, and more than 18 percent of “long term acute care” institutions, which offer critical care such as ventilator support for patients who need that level of care for months. (cite)

The bad new for South Korea is that, once introduced, this “superbug” spreads rapidly through regional hospitals due to the lack of preparation for dealing with this problem.

Top image from Nature, in a recent article (July 23, 2013) Farming Up Trouble

At a concentrated animal-feeding operation (CAFO) about an hour's drive west from Ames, Iowa, the usual din of the nursery is punctuated by the sound of piglets sneezing, thanks to an outbreak of H1N2 influenza. Craig Rowles, a veterinarian and the farm's manager, surveys his charges, some of which have mucus dripping from their snouts. “It's just like when you bring kids to a day-care centre,” he says. “After a while, they're going to come home with a snotty nose.”
Rowles is using a vaccine to fight the outbreak, but he is also dosing the pigs with two antibiotics — chlorotetracycline and Denagard — to prevent secondary bacterial infections. The combination is also routinely used to prevent bacterial diarrhoea and other common ailments in piglets.

Such practices have been common for decades. But few CAFOs have veterinarians on staff to advise on antibiotic use. They are not required to: veterinary antibiotics are generally available over the counter. And some CAFO operators use antibiotics much more liberally than Rowles does. Small doses of antibiotics in feed curb low-grade infections that might otherwise stymie livestock growth. Studies have found that certain antibiotics can increase pigs' growth rate by 2.5%, enough to make the difference for farmers between profit and loss. In the current US market, a farmer might get around US$1 per pound for a pig that costs about $0.94 per pound to produce. Although farm owners do not always reveal the quantities or types of antibiotics they use, an analysis of FDA data by researchers at the Johns Hopkins Center for a Livable Future in Baltimore found that in 2009, some 13.1 million kilograms — 80% of the antibiotics sold in the United States that year — were used on farms. 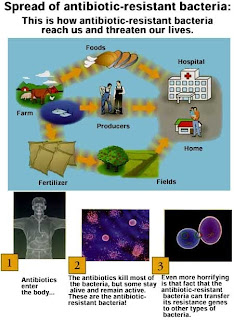 I can't help note how similar that top image from Nature is to the one we made years ago over at Japan Offspring Fund, when we made the video about antibiotic resistance.

Did you know that Japan was the third country, after the United States and the United Kingdom, to become self-sufficient in penicillin manufacture, as early as 1948?

The History of Antibiotics: The Japanese Story

Besides the production of penicillin, much effort was made nationwide in exploratory research on anti-infective, anti-cancer, and agricultural antibiotics, and also other bioactive microbial products. One can list upwards of 117 useful antibiotics and related agents of Japanese origin, and among them, 41 agents have been licensed out around the world. The first antibiotic from Japan was colistin (discovered in 1950) followed by well-known agents such as mitomycin C (1955), kanamycin (1957), bleomycin (1965), cefazolin (1969), amikacin (1972), piperacillin (1976), norfloxacin (1977), cefoperazone (1978), ofloxacin (1980), clarithromycin (1984), meropenem (1987), and others. The major group is the beta-lactam antibiotics (up to 15), followed by 7 fluoroquinolones and anti-cancer and agricultural antibiotics (4 of each). 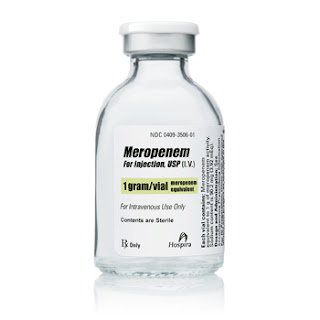 Be that as it may. More studies are needed, here is one that shows clear links between the use of antibiotics in Japan's pig farms, including fluoroquinolone, another very important last-resort drug for humans. It really should not be used on pigs as it is so clearly leading to antibiotic resistant bacteria. Tragic.

Update: Kanamycin (discovered by Hamao Umezawa in 1956) is an interesting antibiotics that also help us understand why genetically engineered crops are such a bad idea. Horizontal gene transfer is now a huge concern, and explains why we have resistance to this drug.

Update 2: Antibiotics for Carbapenem-Resistant Enterobacteriaceae: The End Is Near 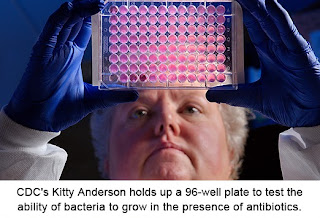 Although resistance to beta-lactam antimicrobials has been an issue among Enterobacteriaceae for years, carbapenem resistance has been relatively uncommon in the United States. However, the past 10 years have seen an increase in the frequency with which carbapenem-resistant Enterobacteriaceae (CRE) have been identified. Infections caused by CRE often have limited therapeutic options, and invasive CRE infections have been associated with mortality rates higher than 40%. 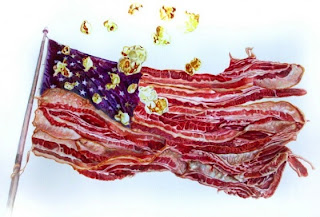 Pandabonium said…
"We could all solve it by stopping to eat pork, ham or bacon, but that is another discussion."

I disagree. I think it is the crucial discussion. Unless we change what we eat, we cannot expect to control these diseases.

Dr. Michael Greger discusses this problem in his brief (3 minutes 23 seconds) video here:
http://youtu.be/zuJ9wnyZXZw
in which he quotes Dr. Margaret Chan of the World Health Organization.

In fact, there is no other way to stop this from happening. Humans must stop eating animals. Period. There is no way to sugar coat this issue. Corporate agribusiness will kill us if we don't stop current practices.
7:07 pm, August 07, 2013

Martin J Frid said…
Yes, that will solve a lot of our current problems.

Meanwhile, WHO/FAO Codex Commission is just about to launch another round of negotiations to approve more drugs for animals, not only antibiotics but hormonal growth promoters. I do wish more people would get involved and help us act, not just complain.
10:44 pm, August 07, 2013

Tom O said…
" I do wish more people would get involved and help us act, not just complain."

Alas, there is just too much tv out there to watch and comfy sofas to sit on, nice 'benri' microwaves to heat up all those ready-meals for people (aka everyone) to get up and make a real stand. And if they do alas you get US tanks and tear gas etc etc (also think the incredibly masive anti Iraq/WMD demo' in London in Feb 2003) and the politicians just ignore it. Because they were elected (yup, our old friend democracy) on something called a mandate. As in once in government-power just do what you like. Because thats why they elected, right?
4:51 am, August 08, 2013