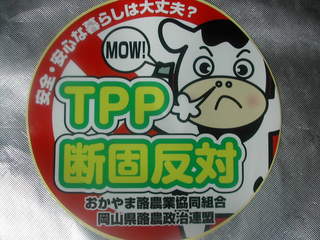 Good analysis of what might be in stall unless we seriously combat climate change, over at the New York Times, by scientist and author G. P. Nabhan. His focus is on what the food crisis might be like for U.S. farmers and consumers, but since America exports food to a lot of countries like Japan and South Korea, we are all in for a nasty surprise.


One strategy would be to promote the use of locally produced compost to increase the moisture-holding capacity of fields, orchards and vineyards. In addition to locking carbon in the soil, composting buffers crop roots from heat and drought while increasing forage and food-crop yields. By simply increasing organic matter in their fields from 1 percent to 5 percent, farmers can increase water storage in the root zones from 33 pounds per cubic meter to 195 pounds. And we have a great source of compostable waste: cities. Since much of the green waste in this country is now simply generating methane emissions from landfills, cities should be mandated to transition to green-waste sorting and composting, which could then be distributed to nearby farms.

Biotech companies have over the past 20 years suggested that genetically modified seeds *could* be a solution if the weather gets hotter/colder/weirder. Monsanto and others have so far failed to come up with any GMO crop that delivers. In fact, natural organisms are so complex and their response mechanisms to weather are based on millions of years of slow changes. I'm pleased x2 that Dr. Nabhan does not propose GMOs, but rather looking at "heirloom" varieties, i e the kinds of fruits and veggies that have largely been abandoned by modern farmers, but could potentially offer hope through conventional breeding:

Finally, the National Plant Germplasm System, the Department of Agriculture’s national reserve of crop seeds, should be charged with evaluating hundreds of thousands of seed collections for drought and heat tolerance, as well as other climatic adaptations — and given the financing to do so. Thousands of heirloom vegetables and heritage grains already in federal and state collections could be rapidly screened and then used by farmers for a fraction of what it costs a biotech firm to develop, patent and market a single “climate-friendly” crop.

Meanwhile, you also have views like this, saying Japan needs to participate in TPP and stop protecting its farmers from imports, even though the government has established that doing so would lower the food self-sufficiency from the current 40% to 14%, and the value of domestic agricultural production would drop by approximately 4.1 trillion yen ($5.2 billion), almost half the total production value (MAFF). Yeah, right: export more cars, that contribute to climate change, while increasing imports of foods from countries that are likely to be unable to export or even feed their own, due to climate change...

The next round of TPP talks will start August 22 in Brunei, but word so far is that the talks are not going well. Not surprisingly, agriculture tariffs are one of the main issues - if not the main - of contention.

Over at East Asia Forum, A. G. Mulgan also looks at how rural Japan would deal with TPP and the election:

JA’s political groups are vote-gathering organisations that influence farmers nationally and within individual prefectures by recommending candidates to their members. They have the biggest impact on the success or defeat of candidates in the 31 single-seat constituencies located in more rural/regional prefectures, so it is difficult for the LDP to ignore them as electoral players.
Many of these regional farmers’ organisations are deeply dissatisfied with the Abe administration’s policy of joining the TPP negotiations. This is the defining issue for them, just as it was in 2012 election. The LDP’s relationship with JA and its political groups can only be described as ‘delicate’, and a survey of the prefectural farmers’ political leagues nationwide reveals a mixed picture.
In Hokkaido, the prefecture likely to be the most affected by the TPP, there are indications of very strong concerns about this issue. There has been no endorsement of the Abe administration; instead, members of the prefectural farmers’ political league have been given a ‘free’ vote, as have those in Gunma and Tottori. In Tottori, the prefectural government’s trial calculation showed that dairy farming would be completely wiped out if Japan participated in the TPP.
In Iwate, the farmers’ political group simply gave support to candidates who oppose the TPP. In practice, this means candidates from Ichiro Ozawa’s People’s Life Party (PLP), Social Democratic Party (SDP), Japanese Communist Party (JCP) or Green Wind Party (GWP).
In Miyagi, Yamagata, Nagano and Hiroshima, the farmers’ political groups are backing opposition party members. In Yamagata, for example, the farmers’ political league is recommending the GWP candidate, explaining that ‘the TPP is a major point at issue — we put our emphasis on the individual candidates instead of their parties’. The rejection came as a big shock to the LDP party prefectural federation. In Aomori, the farmers’ group is recommending the PLP candidate, the JCP candidate and an Independent who is a former prefectural JA central union chairman standing with the DPJ’s endorsement.
In other prefectures — Akita, Fukushima, Ibaraki, Kanagawa, Niigata, Gifu, Aichi, Fukui, Toyama, Ishikawa, Shimane, Ehime, Kagawa, Okayama, Yamaguchi, Nagasaki, Fukuoka, Oita, Kumamoto, Miyazaki and Kagoshima — the farmers’ political groups are backing LDP candidates.

East Asia Forum: Will Japan's farmers support the LDP at the election?