Just as predicted, main stream media promotes fracking and goes to no extreme in publishing claims about other "future" solutions to energy issues. Now it is "Scientists in Japan and the U.S. say they are moving closer to tapping a new source of energy: methane hydrate, a crystalline form of natural gas found in Arctic permafrost and at the bottom of oceans."

Commercial production of methane hydrate is expected to take at least a decade—if it comes at all. Different technologies to harvest the gas are being tested, but so far no single approach has been perfected, and it remains prohibitively expensive.

So, what are some of the concerns?

The biggest concern is that the sediment that contains methane hydrate is inherently unstable, meaning a drilling accident could set off a landslide that sends massive amounts of methane—a potent greenhouse gas—bubbling up through the ocean and into the atmosphere. 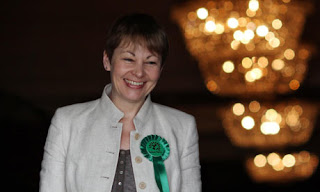 As Dr Lucas, a one-time MEP and former leader of the Green Party, was led away, she said: "I'm proud of the people around me who have put their bodies where the police are. They have tried to use the democratic processes, tried to raise the issue through those democratic panels. "The government isn't listening. Climate change is the greatest threat that we face and I think that people are right to try and take action against fracking."

Dr Lucas's son was also arrested, according to activists. Others stationed outside the drilling site agreed to leave when police threatened them with arrest.Four members of the campaign group Reclaim the Power who chained themselves to a disabled man's wheelchair were unlocked and left the area. Others were dragged away by officers as protesters tried to cling hold of their legs to keep them in the area.

Activists blockaded the road leading to the drilling site to prevent traffic moving in and out of the area, according to Ewa Jasiewicz, spokesman for the protest group No Dash for Gas. "There was traffic on Saturday, a lorry did enter the site so even though Cuadrilla say they've stopped drilling, we still need to shut them down properly and make sure they don't do any work today. I think there'll be a renewal of the blockade as the day goes on, " she said.

As she was led away, Ms Lucas said: “Along with everyone else who took action today, I’m trying to stop a process which could cause enormous damage for decades to come.“People today, myself included, took peaceful, non-violent direct action only after exhausting every other means of protest available to us.”

Here in Japan, The Asahi presumes, based on (I suppose) PR material from industry sources, like the JOGMEC: "Surveys of methane hydrate reserves beneath the Sea of Japan is now under way as part of an effort to give Japan a steady supply of natural gas for decades to come."

Scary how The Asahi has no inclination at all to worry about the risks, such methane gas as a major culprit for climate change, if this is to be explored further.


One of JOGMEC's corporate objectives is to overcome the constraints of limited resources. Our investigation of next-generation energy resources includes research on methane hydrates. Known as "burnable ice," methane hydrates available within Japan's territorial waters may well be able to supply the nation's natural gas needs for a century. JOGMEC also aggressively investigates and researches mineral resources deep in the ocean, where rare metals are abundant.

Methane hydrate is a crystalline solid like ice that stores gas molecules, usually methane. Each flammable gas molecule is surrounded by a cage of water molecules. Methane hydrate can be found and under in the permafrost of polar regions and in the sediments of deep-sea regions where the temperature is low and the pressure is great. Methane gas is used as municipal gas and fuel for vehicles and fuel cells, and is a cleaner fuel than oil and coal.

Deposits of methane hydrates have been reported in marine sediments in the Nankai Trough off the Pacific coast of central Japan, where the water depth is more than 500 meters. Some estimates indicate that the reserves of methane hydrate correspond to a 100-year supply of natural gas for Japan, making it an important potential source of energy. The Japan National Oil Corporation (JNOC) began research work on methane hydrates in 1995, and JOGMEC has overseen the project since the JNOC's restructuring. An international joint research team including Japan has obtained successful results in experimental production of methane gas by injecting hot water into a borehole in the Mackenzie Delta in the arctic region of Canada.

In accordance with Japan's Methane Hydrate Exploitation Program established by the Advisory Committee for National Methane Hydrates Exploitation Program under METI, JOGMEC promotes the evaluation of methane hydrate resources in the Nankai Trough and other regions. Plans for test production of gas from the methane hydrates in the Nankai Trough will depend on the results.

Pandabonium said…
Talk about letting a genie out of a bottle. We know from long experience (have they forgotten Deepwater Horizon?) that there is no guarantee of safety or containment. And looking at that map you posted, what about the expected earthquake in the Nankai Trough? - which happens to coincide with the location of much of the methane hydrate.