Another IKEA Opens In Japan... 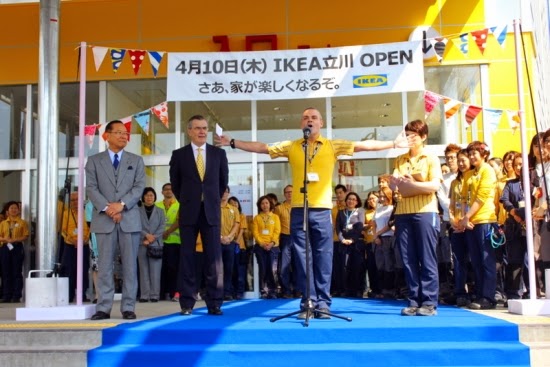 ...and I was not invited, again. LOL, I went to visit the new one in Tachikawa, western Tokyo, that just blew me away. What a culture shock. The best and the worst, of two worlds!

First, it is HUGE unlike anything I have seen in Japan. Yes, there are other Home Centers and some are rather big, but IKEA is humongous and like a maze, once you get inside. You will get lost among the Älmhult designs with names like Tönt or Skvallerkärring and Kullerbytta. Well, not the first two, but maybe the last one, say for a cozy armchair made in Malaysia. Funny thing, at IKEA, next to nothing sold is actually Made in Sweden.

Dazed amongst all the blue and yellow, I walked and walked, lost among plastic window cleaners at 200 Yen or pretty classy paper lamps at 2000 Yen. Oh, they have expensive items too, but I wasn't in the mood. Weird plastic Christmas decorations and mass produced Almoge curtains. Not an Organic cotton cushion in sight, but that might change, I suppose, if people here start asking for it.

Best and the worst? Well, the staff is super friendly, and addressed me in English, which was odd, but cute, since I said "Tack så mycket" in Swedish, so maybe they just misheard. But again, very friendly and helpful, in that special Japanese way, where customer is, well not king, more like, "I appreciate that you shop here, that pays my salary, so I will treat you like I wish you would treat me" kind of way. Then of course, this being Japan, the lack of real information, as in what kind of materials are really used, and where do products come from, like the wood, is it from Amazon rain forests or Siberian old growth, cut down by dubious loggers hoping to retire on the Crimea...

I really liked the ubiquitous IKEA restaurant on the second floor, if you are a vegetarian you could eat well there, try the broccoli medallion, grönsakskaka or ベジタブルメダリオン for 200 Yen, with mush potatoes and salad, or rice. For all of you who eat anything, there are meatballs, and other IKEA language pages identify them as made with pork and beef from Australia, but not so the Japanese page. That may because a lot of processed food from Australia contains meat that is imported from other countries.

Australian Pork Ltd told the committee that most consumers are unaware that 70 per cent of "Australian made" ham and bacon is made from imported pork.

So it is complicated. The salmon may or may not be from Norway, the information is confusing.

In the famous IKEA food shop, I bought knäckebröd, Made in Finland. Yummy, and I trust that, real rye bread cannot be faked...

OK, back to regular blogging, soon, after this dip into Swedish multinational colonialism redux, a kind of reminder that the World carries on, with or without you... Lots and lots of young couples in their 20s and 30s, looking to spruce up their homes. I wish them well, and I wish IKEA will become a responsible corporate member here in Japan, and publish their CSR report in Japanese, for a start.

TenThousandThings said…
Your LOL made me LOL. I'm a fan of Wasabrod (sourdough rye). I hope it's sustainable & that the maker is responsible.

Unknown said…
Maybe it's just me but I've never been to an IKEA store. Just haven't although could see the 'self-packed' appeal and that of Scandinavian design. When in Brighton we managed to get all we really wanted/need - pine shelves etc - locally.

HOWEVER! There is a wonderful Danish store where you can go in with the equivalent of Y170 and come out with something magical -

Have a look around!

Martin J Frid said…
TTT, I like Wasabrod, all rye and not much else. My favourite.