Updates From The CBD Conference In Pyeongchang, South Korea 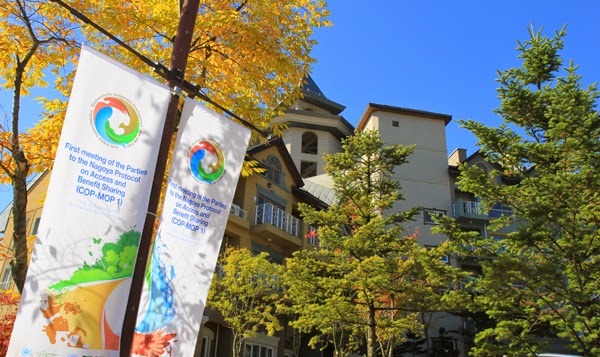 The COP12 conference in South Korea is currently discussing all kinds of matters related to biodiversity, from falcons and sharks to illegal logging and "Action for a World Living in Harmony with Nature":


Read more: http://biodiversity-l.iisd.org/guest-articles/how-cites-is-taking-concrete-action-for-a-world-living-in-harmony-with-nature-cites-contribution-to-the-un-decade-on-biodiversity/
The Convention on International Trade in Endangered Species of Wild Fauna and Flora (CITES) from 1973 is contributing to: realizing the Strategic Plan for Biodiversity (2011-2020); achieving the 20 Aichi Biodiversity Targets; and celebrating the United Nations Decade on Biodiversity's vision of a world living in harmony with nature...
Learn more about CITES by visiting www.cites.org or connecting to: www.facebook.com/CITES; www.twitter.com/citesconvention; www.youtube.com/citesvd; and www.flickr.com/cites.

The CBD Alliance is in Pyeongchang, and publishes daily pdf editions of ECO, a newsletter with more alternative views and NGO's criticism of the lack of progress, and its impact on - for example - indigenous peoples:

http://www.cbdalliance.org/en/index.php/en/our-work/ecos#cop12l
For example, groups of Korean activists who are opposed to the Winter Olympics to be held here in Pyeongchang in 2018 have not been able to voice their concerns, as tight security keeps just about everyone out of the conference area.

More official daily reporting from the IISD here:
http://biodiversity-l.iisd.org/events/cbd-cop-12/
A large range of topics are being discussed including how to implement the Nagoya Protocol for Access and Benefit Sharing, that was finalized four years ago at the CBD conference in Japan. However, shame on Japan for not yet ratifying this important tool. The Mainichi has more:

Nagoya Protocol on biodiversity comes into effect, Japan yet to ratify

TOKYO (Kyodo) -- The Nagoya Protocol on biodiversity, which is aimed at facilitating the equitable sharing of benefits from the utilization of genetic resources, entered into force Sunday with more than 50 countries having ratified it.
The protocol was adopted in October 2010 at a conference held in the central Japan city. Tokyo signed it in 2011 but has yet to ratify the pact due to opposition from pharmaceutical companies and other businesses that fear joining the framework would increase their financial burdens.
The first meeting of the parties to the Nagoya Protocol will begin Monday in Pyeongchang, South Korea, where the 12th meeting of the Conference of the Parties to the Convention on Biological Diversity is being held.
The protocol came into effect 90 days after the number of ratifying countries topped 50 in July. At present, 54 countries have ratified the pact, according to the Montreal-based Secretariat of the Convention on Biological Diversity.
Achim Steiner, executive director of the U.N. Environment Program, said in a statement the Nagoya Protocol "will create greater equity and transparency for both providers and users of genetic resources which will enhance the contribution of biodiversity to development, poverty eradication and human well-being."
The Japanese government aims to complete domestic procedures to ratify the protocol by 2015. Environment Minister Yoshio Mochizuki told a press conference Friday that Tokyo is seeking to join the pact as soon as possible.