Kyoto Journal 83: Food Issue (With An Interview With Me!) 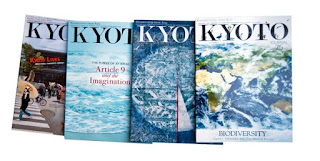 Just published is the 83rd issue of KJ, as it is known among fans. I have some old print issues that I hope will become really valuable at some point (just kidding) from when I first lived in Japan 1988-1993.

This time, KJ is all digital, the topic is food, and what could be more timely?

Japan, Asia and the world face a number of huge challenges, including food safety, food security, seed/genetic/biodiversity concerns, not to speak of water and agro-chemical/fertilizer related concerns. Climate change is already causing havoc.

Fuel? It will not stay cheap forever, and then how do we keep supermarkets and convenience stores up-to-the-last-minute with the latest "fresh" goods? Fertilizers? Not up for grabs forever, either. Add to that land ownership legal battles, and the fact that in many places, farmers are aging and not enough young people are prepared to take over. Plus trade related issues like WTO/TPP and a "spaghetti bowl" of bilateral trade agreements (I refuse to call them "free trade" agreements because they have nothing to do with that).

Go to the KJ website, where you can read much more, and even order the real thing:

Food pervades every area of our existence. It sustains us. It inspires us. It enslaves us. It educates us. It may kill us. It allows us to communicate with the Gods.
Your food is not mine, nor mine yours, but we may share it, and in so doing, what joy.
Few remain silent on Food. And why would one? What a natural topic for discussion, discourse, eulogy, outrage, comedy, reflection, prayer, ire, poetry, love.
Food is simultaneously universal and particular, literal and metaphoric. It is edible, incredible fun, a celebration of life itself. And so many of its greatest exponents and proponents live here in Asia.
Kyoto Journal is a non-profit Kyoto-based magazine founded in 1987. Its 8th digital issue and 83rd issue—FOOD!—explores the essence of what we eat, in all of the above aspects.
Guest Editor John F. Ashburne, long-time Kyoto resident, has written for the Wall Street Journal, Forbes, The Japan Times, Louis Vuitton City Guide Kyoto Nara 2011 and Wall Street Journal Asia, and authored the Lonely Planet Food Guide Japan. He is an ‘undercover judge’ for a famed global culinary award that must remain unnamed.
FOOD!—a delectable feast of articles, essays, interviews, poetry, and fine photography, painstakingly prepared by our all-volunteer international kitchen crew—will be released on August 1st, 2015 (and available for download from Newsstand). Our launch party (a potluck, naturally) will be on July 25th at Impact HUB Kyoto (contact us for more information).

Oh, and there's an interview with me in this issue. I speak on what we do over at Consumers Union of Japan, and the challenges of working at a small NGO/NPO, and the joys too. Here are two questions and my replies:

How does CUJ view the current attempts to fast-track the controversial and largely undisclosed TPP agreement? How do you see the TPP affecting food producers and consumers in Japan?

As I noted earlier, TPP (and before that, the World Trade Organization*) is a major concern. CUJ went to Seattle in 1999 to the infamous "Battle of Seattle" ministerial, and also particpated in the Hong Kong ministerial. And more recently, we went to Brunei for the 19th negotiation round of the TPP. Let me explain - we participate as "stakeholders" which is a funny name, but that's what we get. CUJ is a member of Consumers International, that has a seat at the table as an observer at such events, if we are lucky. Which means we can try to lobby governments, and other participants. We can also sit in on the Japanese government's meetings each day, so called "briefings" and we can actually ask questions and - complain. While there, we also talk to media. Before and after, we usually have meetings in Tokyo and explain what went on - or what didn't happen. TPP has been particularly frustrating, and yes, there will be a lot of adverse effects on Japan's farming community, should the TPP be imposed on us here. Hokkaido in particular will be hit very hard.


Do you see the aging of Japan's population having any significant impact on production or consumption? Japan prides itself on the uniqueness of washoku, in various forms. Will this country's traditional food culture require any kind of special protection, to be maintained successfully into the future?

Yes and no. As we all grow older, won't we all want to eat better? Maybe we will grow more of our own veggies. Teaching the kids about washoku and the joys of simple life may turn into a growth industry for those elderly with a sunburn and a wonderful smile, as they proudly show off their amazing farming skills! Slow food, local food, organic (yuuki) and no additives/pesticides (mutenka) - so much of that was a reality here until the 1960s, and there are so many people who remember that it can be done. Small scale agriculture has a lot of advantages too.

The traditional cuisine, like kaiseki, will probably prevail, but what's more important is what we will all eat on a regular basis, day-to-day. Soba of course, from buckwheat, but what about ramen (from imported wheat)? Sushi may get increasingly expensive and rare, if ocean resources are not carefully protected (and they are not). Again, I think we will have to go back to a diet of more wholesome grains like genmai (whole rice), and many more seasonal vegetables and fresh fruit. And, you know what, I'm actually looking forward to it!

Top image from Organic Kyoto, and here's a link to Ten Thousand Things, one of my favourite blogs!

*Update: Just today (Friday), Wikileaks revealed that the US NSA has been spying on Japan, especially to find out its stance on trade issues, and it is huge news here...

Pandabonium said…
Excellent. I especially enjoyed the 2nd question or rather, your answer, shared here. Soba is good food, and delicious, if made with the whole grain. Ramen? not so much. Ramen, udon, somen, etc. are all made from processed grain and lack the micronutrients that whole grain foods contain. Genmai is wonderful food and so much more flavorful than hakumai. Sushi? It used to be a favorite of mine, but no more. Fish is full of saturated fat and now pollution is global such that it all is contaminated with mercury, dioxins, and pcb. If one makes one's own sushi it can be made with genmai and delicious fresh vegetables - easy to do with maki-zushi.

For months I've been out of town and for the most part off-grid.

Long time. As always nice to read your eco links. Wondering if the nuclear reactor in Kagoshima will be shut down soon ? For my part, I shot them a call in my best [i]yakuza[/i] voice.

Good to see you featured in KJ, and well said on small agriculture being re-branded and re-taught. I think The Japanese-ness of food and food production won't go away entirely, but the broader food culture, to my mind, will change (is changing) significantly - over the course of history Japan HAS changed significantly from time to time.

Perchance the counter-culture (small-scale horticulturists/communities) will be hip in 30-40 years from now, attracting tourist-like attention similar to what we see with temples and shrines enjoying today.

Martin J Frid said…
Thanks Ken, off-grid is the new "new" so I congratulate you. Looking forward to more posts and photos from your Nagano retreat. Must be hard to keep it from getting overgrown with all the green stuff. Maybe best not to focus on that for now, and just enjoy the views from the porch? How are the night sky stars there, amazing?
9:13 pm, August 18, 2015

The porch view is of mostly trees with only a slight view of the mountains on the other side of our valley, but a 5 minute walk from the kominka affords, in my opinion, one of the greatest "mountain range" views in Japan - that of course being of the Hida Range, or Northern Alps, thrusting into the skies. [ ● Live from very near ]

Keep up the good work. Always a pleasure to learn from here.