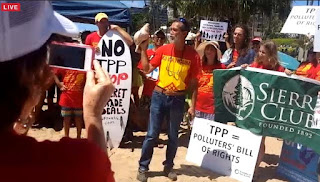 New files released by Wikileaks show that the US has been spying on Japan, especially trade related issues (and climate change). Very embarrassing for Abe's government, as the TPP negotiations are at a crucial point in Maui, Hawaii this weekend. (Image from July 29, 2015 Maui Protest)


Today, Friday 31 July 2015, 9am CEST, WikiLeaks publishes "Target Tokyo", 35 Top Secret NSA targets in Japan including the Japanese cabinet and Japanese companies such as Mitsubishi, together with intercepts relating to US-Japan relations, trade negotiations and sensitive climate change strategy.
The list indicates that NSA spying on Japanese conglomerates, government officials, ministries and senior advisers extends back at least as far as the first administration of Prime Minister Shinzo Abe, which lasted from September 2006 until September 2007. The telephone interception target list includes the switchboard for the Japanese Cabinet Office; the executive secretary to the Chief Cabinet Secretary Yoshihide Suga; a line described as "Government VIP Line"; numerous officials within the Japanese Central Bank, including Governor Haruhiko Kuroda; the home phone number of at least one Central Bank official; numerous numbers within the Japanese Finance Ministry; the Japanese Minister for Economy, Trade and Industry Yoichi Miyazawa; the Natural Gas Division of Mitsubishi; and the Petroleum Division of Mitsui.
Today's publication also contains NSA reports from intercepts of senior Japanese government officials. Four of the reports are classified TOP SECRET. One of the reports is marked "REL TO USA, AUS, CAN, GBR, NZL", meaning it has been formally authorised to be released to the United States' "Five Eyes" intelligence partners: Australia, Canada, Great Britain and New Zealand.
The reports demonstrate the depth of US surveillance of the Japanese government, indicating that intelligence was gathered and processed from numerous Japanese government ministries and offices. The documents demonstrate intimate knowledge of internal Japanese deliberations on such issues as: agricultural imports and trade disputes; negotiating positions in the Doha Round of the World Trade Organization; Japanese technical development plans, climate change policy, nuclear and energy policy and carbon emissions schemes; correspondence with international bodies such as the International Energy Agency (IEA); strategy planning and draft talking points memoranda concerning the management of diplomatic relations with the United States and the European Union; and the content of a confidential Prime Ministerial briefing that took place at Shinzo Abe's official residence.
Julian Assange, WikiLeaks Editor-in-Chief, said: "In these documents we see the Japanese government worrying in private about how much or how little to tell the United States, in order to prevent undermining of its climate change proposal or its diplomatic relationship. And yet we now know that the United States heard everything and read everything, and was passing around the deliberations of Japanese leadership to Australia, Canada, New Zealand and the UK. The lesson for Japan is this: do not expect a global surveillance superpower to act with honour or respect. There is only one rule: there are no rules."


Big news at every media outlet here on Friday, including The Mainichi:

TOKYO (AP) -- The WikiLeaks website published documents Friday that it said shows the U.S. government spied on Japanese officials and companies.
The documents include what appear to be five U.S. National Security Agency reports, four of which are marked top-secret, that provide intelligence on Japanese positions on international trade and climate change. They date from 2007 to 2009.
WikiLeaks also posted what it says is an NSA list of 35 Japanese targets for telephone intercepts including the Japanese Cabinet office, Bank of Japan officials, Finance and Trade Ministry numbers, the natural gas division at Mitsubishi and the petroleum division at Mitsui.
The validity of the documents could not be independently verified, though WikiLeaks has released U.S. government documents many times in the past.
Japanese Foreign Ministry press secretary Yasuhisa Kawamura said Japan and the United States are in communication about the issue of NSA "information collection" but declined to provide details. He added that "Japan will continue to employ all the necessary measures to protect (its) information."
The U.S. Embassy in Tokyo said it was aware of the report but wouldn't say anything further. Mitsui also declined comment, and Mitsubishi did not return a call.
Three of the apparent NSA reports deal with climate change, and the other two with agricultural trade issues, including U.S. cherry exports to Japan.
A notation on one of the top-secret reports on climate change before the 2008 G-8 summit is marked for sharing with Australia, Canada, Great Britain and New Zealand, according to WikiLeaks. It's not clear if it was actually shared.
WikiLeaks has released similar documents in recent weeks that it said show NSA spying on Germany, France and Brazil.
U.S. spying on its allies became an issue in 2013, when WikiLeaks released documents leaked by former NSA contractor Edward Snowden that showed the NSA had been eavesdropping on the cellphone of German Chancellor Angela Merkel.