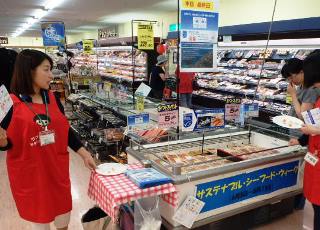 Excellent news: Russia has imposed a drift net ban in its Exclusive Economic Zone (EEZ) north of Hokkaido, Japan. Drift nets are the most devastating ways of fishing - if it can be called that. Stretching as far as 32 km, a single net is literally catching everything along that stretch - between just two boats. Large fish and even seals or dolphins get caught too. Seabirds that get in the way are other victims of this indiscriminate way of cheaply and indiscriminately serving the fishing industry with raw materials.

The Russian ban will take effect January 1, 2016 according to NHK World:

Fishermen in Japan's northernmost prefecture of Hokkaido have visited Tokyo to ask for government help over Russia's ban on drift-net fishing for salmon and trout in its exclusive economic zone.

A law stipulating the ban was officially announced on Wednesday after it was passed by Russia's parliament and signed by President Vladimir Putin.

When the law takes effect in January, Japanese drift-net fishing boats will be unable to operate in Russia's exclusive economic zone.

Hokkaido fishermen and their supporters visited the fisheries ministry on Thursday and handed a letter of appeal to Hidemichi Sato, a parliamentary vice-minister.

The letter says the ban will deal a heavy blow to the economy of the entire prefecture as a large number of firms are involved in processing and distributing the catches.

It calls on the government to extend sufficient support not only to fishermen but also to related local industries.

Sato replied that the government will do all it can to help them. He promised to visit Hokkaido and listen to the views of relevant parties.

After the meeting, Hokkaido's Vice Governor Hiroki Arakawa said prefectural officials will quickly work out what kind of assistance is needed by consulting with locals and will submit requests to the central government.

Speaking to reporters, Chief Cabinet Secretary Yoshihide Suga said he is concerned that the ban will have a great impact on local industries, mainly in the eastern region of Hokkaido.

Read more: WWF.ru notes that there are 35 Japanese and 16 Russian driftnet fishing vessels in the Russian Far East. Each vessel can deploy 32 kilometers of drifting nets a day. This means more than 1,600 kilometers of nets can be set each day, which is comparable to the length of the eastern shore of Kamchatka.

Driftnet fishing is devastating. No other type of fishing results in such considerable mortality of non-target species, including seabirds and marine mammals. Even worse, it can hardly be regulated. According to independent observers and officials, driftnet fishing vessels either don’t report bycatch of non-targeted species, or downplay such data significantly – usually the reports contain numbers, which are 11 times lower than the actual amount of bycatch. If legislators pass the law, it will boost on-shore fishing, save millions of species, and put Russia in line with other advanced countries, which have already banned driftnet fishing in their waters.

This is not a new debate, and there is no excuse for Japan not to be better prepared for the Russian ban. Already in 1991, the UN General Assembly adopted a resolution against driftnet fishing, proposed by Russia, Canada and the United States. Japan obliged by stopping driftnet fishing in the northern Pacific Ocean:

Top image: WWF and the Co-op movement was promoting "Sustainable Seafood Week" in June at Co-op shops and AEON supermarkets. Too little too late? WWF Japan has more (J). AEON, for example, promotes ASC in its CSR/Environment Report (2014), but does not mention anything about driftnet fishing.

There are currently two independent efforts to certify fish and fish products that are more "sustainably" produced than others, one from the oceans ("Marine") and one from fish farms ("Aquaculture"):

Pandabonium said…
This ban was partly in response to the complaints of Russian fishing companies who have seen their river catch dwindle in recent years and partly a reaction to the ridiculous "sanctions", at the behest of the USA, against Russia.

What is needed is a global ban on the practice for ecological reasons.