Sit-in By Okinawa Mayors Today In Tokyo: "Remove the U.S. Marine Base From Ginowan" 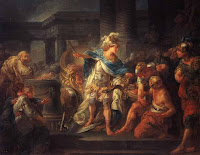 Okinawa mayors are holding a demonstration outside the Japanese Parliament building today Tuesday. The sit-in calls for a "removal" of the U.S. marine air base from Futenma, Okinawa in the city of Ginowan. Of course, the more than 90,000 people who attended the massive rally on Sunday, April 25 have made it clear that Tokyo and Washington must re-think the obsolete security treaty from the 1960s. The Cold War is so over.

How important are these recent events for Japan? There has not been a more interesting change in this part of the world for a very long time. As American power is being reduced, with less economic might to back up its usual posturing, that country tries to fight back against China's rise in the Far East, as this would mean Japan, China (and Korea) will increasingly form policies on their own. But, holding on to its military bases in Okinawa, the U.S. appears to have no real plan for the region except asserting that "new" threats or "the increasingly opaque situation on the Korean Peninsula" will mean that "the presence of U.S. marines in Okinawa Prefecture has become increasingly important."

One of the best suggestions so far comes from John Feffer at Foreign Policy in Focus, who thinks the U.S. should move the marines back to Washington D.C. That, ladies and gentlemen, is a Gordian Knot approach I like.

If you are looking for a longer, more careful analysis of what is happening, I recommend Japan’s Stumbling Revolution by Karel van Wolferen in Japan Focus:

Many governments, including Washington, have long wished for Japan to take a more active role on the world stage. Its economic might changed the fate of industries in the United States and Europe, but from a geopolitical point of view, and in diplomacy, it was barely visible. The rest of the world got used to what was early on labeled as an ‘economic giant but political dwarf’. And now, when the new government says that this undesirable imbalance must change, Americans can only whine about military base arrangements different from what they want.

Karel van Wolferen explains how Prime Minister Hatoyama has upset the power structure of the country's "venerable career officials" who prefer status quo than any change. But he digs deeper in also pointing out how silly American officials now look, as they oppose Hatoyama's efforts:

In the Futenma base case we see a new American presidency entirely missing the significance of what is happening in Japan. Obama and his advisers risk undermining new possibilities for creating a stable new cooperative relationship. Over what? Over something that ought to be minuscule in their global strategic vision. We learn from this that the Obama administration does not have its act together with respect to the revamped diplomatic attitude toward the world it announced when taking over from George W. Bush. It also proves that the American military has taken over far more American foreign policy than the details that relate to the countries it occupies. But considering that almost all of the top American officials dealing with Japan are ‘alumni’ of the Pentagon, this lack of a sense of proportion, this tunnel vision, should not surprise us.

I think we have to agree with Karel van Wolferen's view that solving this must be done on Japan's own terms, in a way that is acceptable first and foremost to the people here who voted for reform:

The manner and tone and the substance of what Clinton and Gates said clearly aimed to intimidate the Japanese public. It is crucially important for the future of the Hatoyama cabinet that it not give in to such intimidation. Solving the conflict to Japan’s advantage can be accomplished by doing nothing for a while, and reiterating that fundamental discussions about the future of the relationship must come first. Nothing bad will happen to Japan if, in the absence of an important American compromise, the deadline set for May is postponed until after such serious mutual rethinking.

Time to take a moment and consider this poem, posted on Peace Philosophy Center, from Henoko, Okinawa:

Gift from the Ocean

At the end of the Battle of Okinawa,
Mountains were burnt. Villages were burnt. Pigs were burnt.
Cows were burnt. Chickens were burnt.
Everything on the land was burnt.
What was left for us to eat then?
It was the gift from the ocean.
How could we return our gratitude to the ocean
By destroying it?
Events Okinawa Peace US military bases US-Japan Mutual Security Treaty (AMPO)