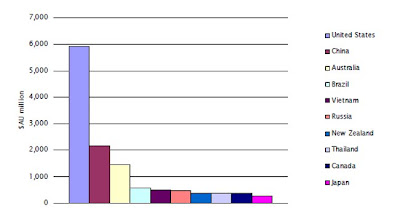 I was rather shocked to learn that South Korea imports almost all its food from China and the United States. Nearly 90% is imported, according to Asian Sentinel - and that includes almost all its wheat and corn, quoting a Samsung report from SERI World. Some 16 countries supply the country with other food items:

...Korea's food self sufficiency has in fact continued to decline due to its falling international competitiveness in agriculture, as well as its increased opening of its food market to foreign providers.

But that is just the beginning.

Food stability in South Korea has experienced a continuous decline, caused by rapidly increased grain price volatility and intensified import source concentration as the western countries, particularly the United States and the European Union, devote more and more of their corn production to biofuels. It is estimated that 35 percent of corn production is now going into biofuels. In addition, the report says, "food safety fell to its lowest level in 2008 at 94.2, down more than 5.85 compared to 2005, indicating a need for efforts to improve food safety. quality, soil, and ecosystems.

The report notes with something akin to alarm that the international grain market "is subject to an oligopoly of the four major global grain conglomerates: Cargill, Archer Daniels Midland, LDC, and Bunge," which have the power not only to perform grain trading functions but to "affect government policy with respect to international trade and agricultural markets using their massive capabilities to obtain information worldwide. South Korea imports 80 percent of its grain through the four. The four giants, the report continues, "exercise tremendous leverage over the worldwide food industry. Business for grain majors has expanded beyond traditional trading of crops to seeds, fertilizers, food and food processing, finance, and bio-energy production. At times, the four grain majors have encroached on consumer welfare by exerting their influence on agricultural producers, or by creating an oligopoly regime."

As food imports have increased, so has anxiety over agricultural product safety, the report notes, with "spiraling increases in the share of GMO food imports, which have risen from about 30 percent to over 50 percent in 2008, "posing a greater threat to food safety."

Yonhap noted that organic food imports were on the rise:

But I think this Canadian report also paints a pretty good picture of the changing situation in South Korea, as consumers are worried about the global economic crisis:

The organic food market grew, on average, 8.5% from 2005 to 2008, after which the sector recorded negative growth of 0.05% in 2009. Re-prioritization of food shopping dollars was most likely behind this decline. In January 2010, new legislation for processed organic products and a new certification system were introduced by the South Korean Government. However, the implementation date was postponed to January 2011.

The lack of support for domestic organic produce means South Korea has missed the opportunity to educate its farmers and consumers to choose healthy and safe food. A pity. It might not be too late to change, but from what I have seen recently, the effort is too small and the country in such an environmental mess that it will be difficult to switch to anything remotely similar to what we regard as sustainable, environmentally friendly agriculture.

Of course I hope they will prove me wrong.

Graph from Victoria, Australia, in a report that notes:

Doalnara is a pioneer among South Korea's organic certification agencies:

I was more impressed after visiting Heuksalim, that grows rice, millet and sorghum according to Korean organic rules:

Heuksalim operates a cooperative farm under its model of urban and rural resource exchange, circulating varieties of domestic rice, glutinous rice, cereals and wild flowers from the producers to the consumers. Heuksalim manages the distribution of environmentally-friendly organic products – through direct sales, retail outlets, wholesale distributions, e-commerce and the operation of a Friday market once a week from March to November. In addition to this, it develops pilot businesses for school meals. Guaranteeing vocational safety and the revitalization of the local community, this initiative creates social jobs and employment opportunities while promoting the use of pro-environmental products in school catering programs. Heuksalim hopes to expand this initiative through conducting market research and developing a database on pro-environmental school meals in the Cheongju and Cheongwon districts. Ideally, with their specific business model for such enterprises, these school-meal business would be self-generating, achieving 20% profit on investment.


Heuksalim’s Research Institute was established in 1993 in the hopes of directing farming trends away from the heavy use of pesticides, fertilizers and antibiotics. Such chemically-based methods of agriculture were seen to be undermining the crop and soil quality, harming human health and contributing to the rapid deterioration of the environment. In response, Heuksalim’s Research Institute conducts studies and develops scientific approaches to organic agriculture. In recent years, it even began operating a pilot farm project to investigate and analyze traditional farming methods. It spreads and shares knowledge of organic agricultural techniques through its publications. Heuksalim has published 13 books – the “Organic Agriculture Series” – on the theory and practice, as well as the success, of organic agriculture in Korea. Heuksalim’s research and development work has earned it accolades and official recognition: in 2002, Heuksalim became the first organic certification body in Korea.

Tom O said…
You could of course relocate to Korea etc ;o) but I think you are better served, in every sense, by sticking to Japan. Where it is better served by yourself. Work from within where you are and CAN make a difference. Of course, there is that 'temptation' of big air-conditioned Lexus and a box of an 'apartment in Seoul...