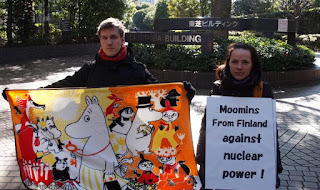 During a demonstration today outside Toshiba's headquarters in Tokyo, anti-nuclear activists pointed out that they had "politely" asked for a meeting with the Japanese company, but were refused without any explanations. Toshiba was selected in October, 2012 to build a new nuclear power plant in northern Finland.

However, after protests intensified, E.On, the largest stakeholder in energy utility Fennovoima pulled out of the project. 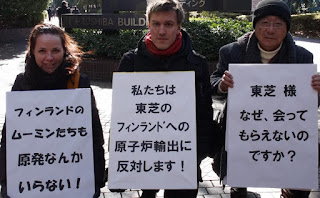 The German energy company E.On intends to pull out of the project aimed at building a nuclear power plant in Pyhäjoki on Finland’s west coast. As E.On would have been the largest single investor with a 34 per cent holding in Fennovoima, the company that plans to build the reactor, the whole project is in serious jeopardy. Two other companies, the meat processing company Atria and the S-Group retail chain announced earlier that they were divesting from Fennovoima. E.On's decision to pull out of Fennovoima is part of a broader move to divest all E.On holdings in Finnish energy companies.

There are a number of likely reasons for E.On’s decision. Electricity consumption has declined in Finland, and the Fukushima disaster in Japan has reduced the popularity of nuclear energy around the world. Germany, E.On’s home country, has decided to phase out the use of nuclear energy by 2022. By that time, the reactor planned for Pyhäjoki could have been ready.

E.On is already a major player in Sweden, which uses more nuclear energy than Finland does. Sweden belongs to the same electricity market as Finland. The cost of the Pyhäjoki nuclear plant has been estimated at about EUR 6 billion. E.On’s share of it would have been about EUR 2 billion. Finding investors to replace the German company is likely to be very difficult, if it is possible at all