Kasumigaura Lake, NHK World, And The Usual Rant From Kurashi

Wonderful, wonderful program from NHK World about a lake just 60 km north of Tokyo, probably not very well known to Tokyoites, but it has its charms. Lake Kasumigaura is actually an ancient lagoon but the current lake was created some 50 years ago when a dam helped set the borders of what was to be water, and what was to be land. However, that also changed the conditions of the area, a lot.

However, (Kurashi taking a deep breath...) NHK World fails to take any notice the huge environmental issues that this lake, Japan's second largest after Lake Biwa, continues to face.

Why gloss over the realities? Why NHK World producers, and foreigners participating in this game, cannot raise even the most simple questions about what ordinary people here in Japan on the ground are working hard to protect, and deal with, such as pollution or loss of biological diversity or wetland destruction issues that concern migratory birds, or - did I mention pollution.

Why indeed gloss over the issues, NHK World?

Start showing Japan not as some kind of gilded cage, but a place with real humans and real issues, and stories about the knowledge and experience to make a difference.

Kurashi says, that "official" site doesn't even begin to discuss the many issues concerning this lake and its people and history - or its future. 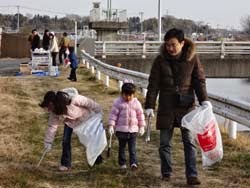 Image: Local company, Oriental Motor doing its share of Corporate Social Responsibility, workers bringing their kids to pick up garbage on the shore of the lake.

More efforts to clean up the garbage around the lake, cue Eco Dane! ("It's Eco!")

No matter what, we need media to help get people out and about, and make thinking about our precious environment a priority. Get NHK World to focus on issues that Japanese people care about. Including, cleaning up, and stopping pollution. That's a lesson for Asia and the world.

Campaign supported by corporations and local people and everyone trying to combat global warming, for example by using green curtains (plants) in the wonderful, wonderful prefecture of Ibaraki. 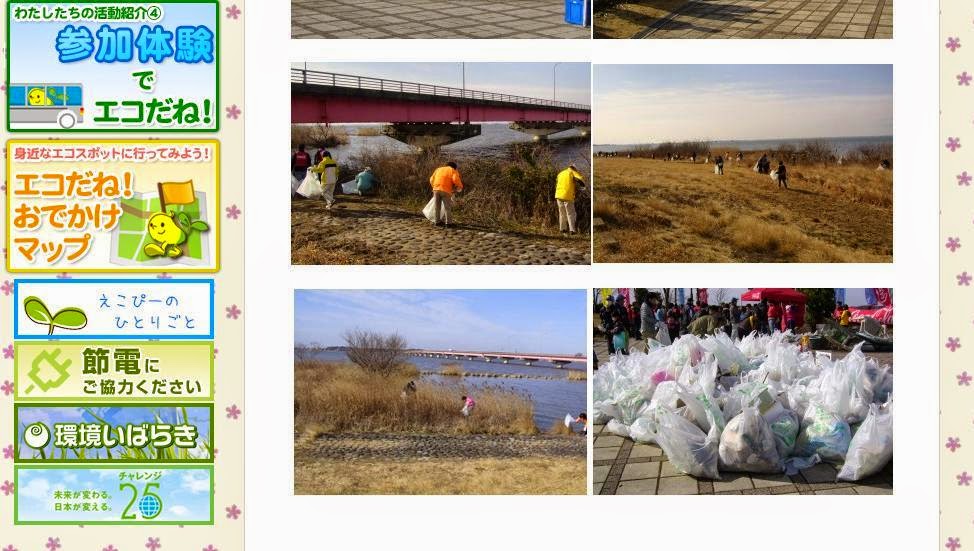 Hoping that makes participants care more about what they consume and how they dispose of the garbage.

Ideally, we would have no plastic garbage thrown away.

Until that can be the reality, do encourage your work place or employer or family to take part. That's a lot of bags of garbage, but someone has to go out there and pick it up and make an event and encourage others. 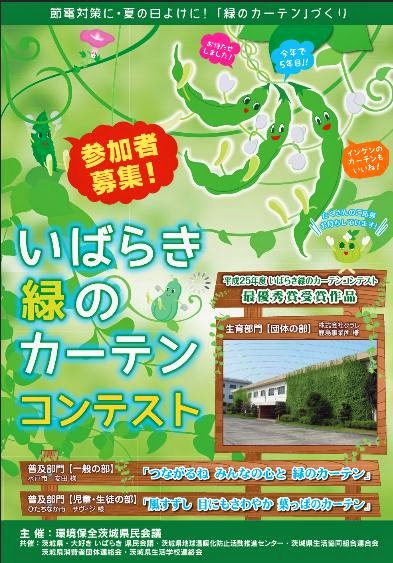 Image: Ibaraki Green Curtain Contest (I like that they use ingen beans as a symbol)

Not like NHK World couldn't do a little research, and find out that so much is going on.

Japan for Sustainability (JFS) has a number of articles in English about the environmental problems in the area: Working with Local Citizens, Companies and the Government to Protect Watershed

The basin area of Kasumigaura straddles Ibaraki, Tochigi and Chiba Prefectures, and at about 2,200 km2, makes up Japan's second-largest lake after Biwako in Shiga Prefecture. The Asaza Project aims to protect biodiversity across this massive area. For such a project that covers such a broad area, it is necessary to create a system that does not allow businesses to be completely autonomous, as this could lead to unrestricted expansion. Because the traditional idea of the nature conservation focuses on the small scale, it cannot be applied to the whole basin area.

The local government has implemented a variety of measures to prevent the deterioration of water quality and the environment, which began in the 1970s; however, we have not seen any improvement in water quality. Since around 1990, people have been saying that the current system is limited and that the government needs to implement more comprehensive measures, but no one is certain of what needs to be done. I too was not certain, but I decided to walk along the lake. Kasumigaura is 250 km around, giving it the longest lakeside in Japan, and I have walked around it once in each of the four seasons.

While I was walking, I saw waterweed, called "floating heart (asaza in Japanese)." This encouraged me to change my thinking. Floating heart helps with the conservation of reeds. At that time, large amounts of reed were cut by the waves and large areas of reed were lost; however, large numbers of floating hearts weakened the strength of the waves. Thus, the Asaza Project was started. I realized that if we can use natural processes, we might be able to gradually restore this huge lake, instead of initiating large-scale bank protection projects. It was 1995.

Asaza pioneered the cooperation with local schools to monitor the status of the lake.

And there is so much more to report:

The Asaza Project has a great English website, do explore. And they need your help to realize these goals.

The Asaza Project is a long-term 100-year plan with the set goal of the return of specific species of wildlife every decade (front page). Each wildlife species represents a particular environmental element to be revived in the lake and basin with the measures needed for that purpose. The goals are as follows: great reed warblers in 10 years, cuckoos and whooper swans in 20 years, bean geese in 30 years, white storks in 40 years, cranes in 50 years, and Japanese crested ibises in 100 years. It is a plan to reverse the extinction of ibises that has taken place in Japan’s last 100 years of modernization. We want to represent, in the form of an image of countryside graced by flying ibises, what people tried to protect and to regain through their struggles against the Ashio Mine Pollution tragedy a century years ago and subsequent pollution problems such as Minamata disease.

The Kasumigaura Boat Trips are arranged by a very serious group of people. They care about the lake's future. They will educate people who apply to go on the sail boats about its environmental challenges - and they are enormous. Going on the famous Hobiki-sen is not just a regular tourist trip. Next date is November 9, 2014. Website here (J).

Independent Web Journal (IWJ) is the site of people who are concerned about the radiation problem after the Fukushima Nuclear Power Plant disaster in March, 2011. Too hot for NHK World to handle? Well, let's hope the levels in Kasumigaura Lake are not that high, and life can go on as usual.

In the Kasumigaura Lake area, there is a group that helps citizens understand radiation issues and provides monitoring. Link to more information and videos about that issue here (J).

Kasumigaura.net is a great website, with a calender of events. Here is September, 2014 (J).

The Forest NGO Mori no Kai has many events to highlight the forests and ecosystems of Ibaraki prefecture.

Remember how Kurashi also reported how local Ibaraki organic farmers are trying to revitalize the region, using humus from local forests? That was back in 2009 and 2010, when I was helping Japan Organic Agriculture Association with a project to highlight the links between forests regions upstream from the river basin regions and all the way down to the ocean:

Broad leaf trees contribute to making healthy humus and organic matter, with more than ten times as much Fulvic acid compared to conifers. In organic rice fields there are more phytoplankton and zooplankton. Also, the breeding levels of phototropic bacteria are higher, and Nitrogen (N2) is fixed.


Enjoy composting! Mix your kitchen garbage (vegetables and organic matter) with fallen leaves as a way to restore CO2 levels in the soil. We call it wakuwaku composting using waku boxes. It is fun for everyone! The Japanese word, wakuwaku, means to enjoy something and do it with enthusiasm. Elementary schools and junior high schools can let the children experience composting. This is an important educational experience to teach young students about organic farming, forestry and fishery projects, and promote a better understanding with a link to the daily food they eat.

Uozumi-san noted that a healthy mountain forest with a large biological diversity, and lots of fallen leaves that can be used for composting: “The forest is the mother of the earth.” Fields should have a large variety of crops. In Japan, projects are underway to help develop shellfish farming and oyster cultivation by planting broad leaves tree saplings in the forest regions upstream from the river basin region. This is based on the understanding that all things are connected: “The forest is the lover of the ocean.”
Conifer forests that are not thinned properly do not allow much sunlight to reach the ground. Thus, the undergrowth is not well developed, and the absorption of CO2 is bad. Use good quality compost to enrich the soil. Create warm beds for vegetables, using heat created by the fermentation and composting of leaves, straw, rice bran and other organic material.
Uozumi-san concluded: “Only good things will come from the clean water that flows in the stream, when only good things are put into the water…”


Organic Agriculture, Forestry and Fishery Project Based On Humus 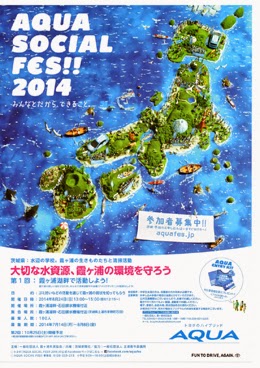 More videos from Toyota, with a grain of salty ocean water ;) supporting the Kasumigaura Lake and others through a festival in August and again in October in 2014, with a cool and very well produced website here.