January 18, 2016
Nope, I'm not going to turn Kurashi into a Ghibli fan club, but this is a film I very much wanted to see so when it suddenly appeared on Youtube I was delighted. Pom Poko tells the story of Tama New Town and its "development" in the late 1960s, from the point of view of the racoon dogs living in the huge forest there. Soon, there wasn't much space left for them, or any other living creatures either.

What's so great about Ghibli is the way they incorporate ancient Japanese myths into modern tales. I didn't know that tanuki, the racoon dogs, were such a prominent part of folk tales here, and that they are said to have transformation skills. Watch some anime, learn a lot.

But while it is also a very sad story, it encourages us to fight, perhaps violently, but more cleverly. Anime and "comics" in the West - I'm looking at you, Disney - creates fluffy make-believe with romance and happy endings only. Frozen seems to be just the latest in a long line of popular masterpieces mentally disturbing kids all over the world. Disney's Jungle Book (1967) was planned to be much more dark and sinster, something Walt Disney didn't want for a family movie.

Anyway, having recently read Kipling's The Jungle Book(s), I was delighted that his real stories are much more Ghibli-like, giving me hope that there could be a re-make of the original film - by Studio Ghibli, of course! Kipling's novel is exactly this: animals reacting to human folly and exposing the hidden magic of the life of all the creatures in the wilderness. 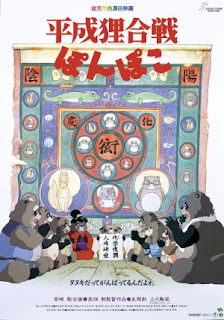 Tama New Town didn't turn out so bad in the end, and The Racoon Wars (Pom Poko is the confusing English title, the Japanese original is 平成狸合戦ぽんぽこHeisei Tanuki Gassen Ponpoko or The Heisei-era Racoon Dog War Ponpoko) ends making me feel a little better, in spite of it all. I like how it takes a stand, showing environmentalists and tree huggers in a good light and yes, by 1994, there are still racoon dogs around as Wikipedia notes

They blend into human society one by one, abandoning those who cannot transform. While the media appeal comes too late to stop the construction, the public responds sympathetically to the tanuki, pushing the developers to set aside some areas as parks. However, the parks are too small to accommodate all the non-transforming tanuki. Some try to survive there, dodging traffic to rummage through human scraps for food, while others disperse farther out to the countryside to compete with the tanuki who are already there.

In a touching coda, one day, Shoukichi, who also joined the human world, is coming home from work when he sees a non-transformed tanuki leaping into a gap in a wall. Shoukichi crawls into the gap and follows the path, which leads to a grassy clearing where some of his former companions are gathering. He joyfully transforms back into a tanuki to join them. In an emotional final scene, Shoukichi's friend, Ponkichi addresses the viewer, asking humans to be more considerate of tanuki and other animals less endowed with transformation skills, and not to destroy their living space; as the view pulls out and away, their surroundings are revealed as a golf course within a suburban sprawl.
Anime