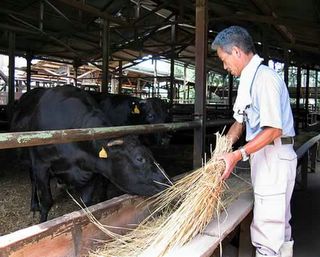 Japanese cattle breeder Shunichi Igarashi feeds his cattle at his farm in Higashi Matsuyama, north of Tokyo, on September 13, 2005. Things are a lot harder for the second-generation wrangler and other Japanese cattlemen since mad cow disease struck their business, driving hordes of Japan's famously fickle consumers away from beef. To bring those customers back, Igarashi banded together with other farmers two years ago to sell their beef made from cattle fattened on a diet of non-genetically modified (GMO) corn and soybeans. They call it "Yumeni-gyu", literally beef that tastes like a dream. Photo: Reuters, Text Mainichi.