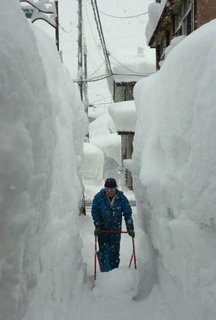 Most of Japan, except the Tokyo area, has gotten massive amounts of snow this winter. NHK reports 100 deaths, mostly old people falling of the roofs of their houses while clearing snow. And that turns out to be an important thing to do. Many houses have collapsed, and a six-year-old boy is in a coma after being buried in snow that slid off a roof while he was playing outside.