Ibaraki prefecture is a haven for farms of all sizes and shapes and as I wrote last summer in my post titled Ibaraki Trip, you can learn a lot about that state of Japan's agriculture there.

Last weekend I again had an opportunity to visit friends near Kashima, as we went sailing on Lake Hinuma (in the pouring rain, but that's another story!) and enjoyed some of the local cuisine. Fish in particular is abundant in the fall in Ibaraki, including hirame (flat fish), sea bass and abalone. In fact the small silver fish was jumping in the lake (one even managed to land in the Lido) and on early Saturday morning we saw anglers with rubber gear standing in the shallow lake with long rods.

Nokyo, the Central Union of Agricultural Cooperatives (農業協同組合 nōgyō kyōdō kumiai), also called JA-Zenchu, or just JA as it is often abbreviated, is Japan's farmers' association. It is a very powerful lobby group that is often critizised by the organic farmers as JA promotes pesticides and fertilizers as well as the most recent farming methods and trends. That has led to difficulties for small farms to survive, yet JA has also been a backbone of life in the rural areas, with JA banks, loan institutions and more acting as focal points for farmers, their families, and just about everyone else too. 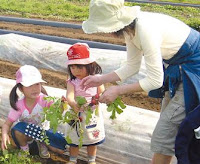 JA Ibaraki has recently added farmers markets to their activities. We visited a very attractive place about 25 minutes from Mito, and the Pocket Farm Doki Doki "Home Cooking" Restaurant. It is housed in a brand new building in the style of an old farm house, with a high ceiling and dark thick beams to support the roof, but added to that huge windows so guests get a great view of the forest and the small park. If there was one thing to complain about, it was the noise, as the many families and kids and everyone else seemed to have a great time eating and drinking (no alcohol was served).

The food was terrific! It was 食べ放題 (tabe hōdai) style, meaning you pay once and then you can eat as much as you like, and I think I went back at least 3 times for more. It was not a regular バイキング (viking) style buffee that we call smörgåsbord in Swedish, but rather many different stations where you could sample a lot of dishes. I had plenty of different salad veggies, pumpkins and tiny white radish that seemed to have been picked the same day, and other fresh autumn vegetables both steamed and grilled. Mito is famous for its natto, and I tried that too of course, as well as freshly made tofu that looked just like plump goat cheese. They also served tempura and grilled fish and meat, and the cooks brought out new dishes all the time. I had some Italian style bread, and when I went back for more, it was gone, and there was another type instead. As I mentioned, no alcohol (probably since most people drive to get there), but instead plenty of juice and many varieties of tea. And of course, some desserts too, mostly fruit and yoghurt - all in all very healthy and well thought out.

What I really liked was the friendly atmosphere and the focus on local, Ibaraki-made ingredients. All dishes in the different stations had memos explaining what the dish contained, and many also the name and photo of the farmer and the chef who had created the food. That is so important, and something JA Ibaraki should promote more. After our feast, I talked to the floor manager, and she expressed how strongly she feels about food safety and how they do everything they can to make this restaurant a better place for eating and educating people about quality food. 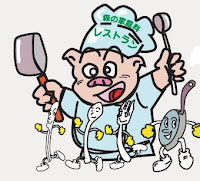 For example, she said all dishes are 無添加 (mutenka, no chemical additives) and their rice is a local コシヒカリ (Koshihikari) variety grown in Ibaraki, and for meat eaters, the ham and the sausage are made in the Doki Doki Factory nearby from the local pigs - a great place to show kids where your meat comes from, by the way, as you can visit the farm animals and get a guide to explain more about meat production.

Finally - if I was ranking this restaurant, they would get five stars!!

Thanks to Pandabonium and K for a great trip ;)

Martin J Frid said…
Looking forward to the photos, although most of them were taken under severe conditions. It rained A LOT!
10:38 pm, October 14, 2009