October 31, 2009
The Japanese kanji for Buddha is a simple 仏 (hotoke) - a simplified version of the Chinese 佛, which is also common here. How did this character appear? I was reading an essay on Sacred Texts, a great website, when I found one explanation that I had never heard before.

The essay is The Creed of Half Japan, by British Reverend Arthur Lloyd, who spent more than a quarter century as a lecturer at the Naval Academy in Tokyo. 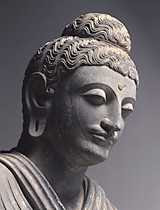 This particular book was published in London in 1911. He notes that Nestorian Christians had made inroads in China some 1500 years ago. Did they influence the Chinese Buddhists? Rev. Lloyd clearly thinks so. The Nestorians brought ideas about Jesus and his teachings to the East, and there are records of at least two Nestorians reaching Nara in the 8th Century, all the way from Persia, Syria (or Turkey). Around exactly that time, Rev. Lloyd notes, Japan started caring for the sick in a new fashion, and there are other examples of how Christian ideas may have influenced people in the Nara Era.

What I found really surprising is how Reverend Arthur Lloyd explains why the kanji for Buddha looks like it does. Here we go:

), the Chinese Fo, the Japanese hotoke. The component parts of this character are said to represent a man (

); and we may suppose the two missionaries to have said to the people of Lôyang (the ancient capital of China), "We have come to tell you of the Mabito, of the true man, of the man with the bow and arrow whom your Emperor saw in his vision." It is possible (for there were Greeks living in India, as we have seen) that under the Indian names of these two missionaries there may have lurked a Greek nationality. At any rate, the character they chose is capable of another signification, besides the one usually given—the three first letters of the name of the Perfect Man, our cherished Christian monogram,

, the man with the bow and arrows!

(Image of Ghandara from Pakistan from the 2nd Century - Miho Museum)

Rev. Lloyd thinks this character for Buddha was introduced to China about the year 68 A.D. Be that as it may, how did the man with a bow and arrows come to represent Buddha? In the year 67 A.D. (we are told) the Book of Revelation was written:

In that book the author, after a rapid survey of the Churches under his immediate Apostolic guidance, and after a vision of God in His glory, proceeds to tell his readers the things that must shortly come to pass. The immediate future is a sealed book with many seals which none but the Lamb may open. The first seal is broken (Rev. vi. 2), and St. John is told to come and see "a white horse, and he that sat on it had a bow, and a crown was given unto him, and he went forth conquering and to conquer."

Rev. Lloyd found it curious that Buddhist temples in Japan from the early era has images of white horses, as a illustration, or perhaps an object of worship.

Nestorian.org, the "unofficial" website for the Nestorians, also make a point about early contacts between Japan and their followers:

American Reverend Ken Joseph told a gathering here on March 16 that Christianity first came to the Far East roughly 1,800 years ago along the "Silk Road," passing through China to Nara, central Japan. Evidence of this, Reverend Joseph said, was a copy of the Gospel of Saint Matthew in old Chinese script, dating back to the ninth century, found inside the Koryuji Buddhist Temple in Kyoto, near Nara.

The White Horse Temple is the very first Buddhist temple in China. It is a popular spot for pilgrims and tourists even today. The wikipedia entry has the story:

According to the Book of Later Han history, Emperor Ming was said to have dreamed one night in the year 64 of a golden person standing 20 metres tall and with a radiating white aureola flying from the West.[citation needed] The next day he told his ministers, and the minister Zhong Hu explained to him that he had probably dreamed of the Buddha from India. The emperor then sent a delegation of 18 headed by Cai Yin, Qin Jing and Wang Zun to seek out Buddhism. They returned from Afghanistan with an image of Gautama Buddha, the Sutra of Forty-two Chapters and two eminent monks. The monks names have been variously romanized as Kasyapamatang and Dharmavanya, Moton and Chufarlan. The next year, the emperor ordered the construction of the White Horse Temple three li east of the capital Luoyang, to remember the horse that carried back the sutras. 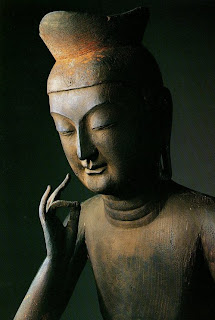 Rob Gilhooly over at the The Japan Times has more: The ancient temple Koryuji in Kyoto has another name, Uzumasa-dera. And what does that mean?

Yoshiro Saeki, known as the father of research on the Eastern Church, wrote two books on Nestorianism in the early 1900s. While both concentrate largely on interpreting relics and documents found in China, Saeki, who studied both the Persian and Syriac languages at Oxford University to help his studies in Eastern Christianity, also notes Imperial records in Japan that mark the visit of a Persian missionary to Nara in AD 736.

Saeki believes this man, who was granted an audience with the Emperor and is said to have received "Imperial favors," to be the father of Yesbuzid, who erected the Nestorian Monument in China (...). What's more, in his book "Nestorian Missionary Enterprise," British scholar John Stewart says that it was through the teachings of this Persian visitor that Empress Komyo (701-760) was "led to embrace Christianity."

The legacy of the early Christians lives on in the Japanese customs and language of today. Saeki believed that the origin of the word "Uzumasa" was taken from the Aramaic "Yeshu Mesiach," meaning "Jesus messiah."

(Image of Miroku Bosatsu, Koryu-ji Temple from Heritage of Japan)

Koryu-ji is thought to be Japan's first Buddhist temple. And why are some temples called -ji and others -dera in Japanese? The explanation I have been given by a teacher a long time ago is that names that are Chinese are followed by -ji while names that are Japanese are followed by -dera (such as 苔寺 Koke-dera or the Moss Temple in Kyoto, which is also known as Saiho-ji). If you have any further knowledge about that, please comment.

Dear long-suffering friends of Kurashi, if you enjoyed all of that, may I suggest the The Smokey the Bear Sutra by Gary Snyder: A much beloved short poem about the relationship between Buddhism and ecology, written by one of the 'beat' era poets, simultaneously funny and profound.
prayer Universe

Blue Cheese Rocket said…
My wife and I agree with you on the -ji, tera thing. It's straight onyomi/kunyomi to match the name, we're pretty sure.

Interesting stuff all around. I think the bow and arrows could also be either an accidental or a deliberate association with Arjuna. The name Nagarjuna, as well, I seem to remember derives from some symbolism about wisdom of nagas being applied in rhetoric as precise and mighty as Arjuna's arrows. Or, maybe that explanation or name was actually contrived to be associated with the text at a later time. Who would know? Anyway, it's been years since I studied that stuff. I could be confused. Cheers for the good article.
7:25 pm, November 01, 2009