A Farmer's Tale: From Nagasaki With Love

I just loved this essay on GreenJapan.com, a website I like: Seed saving is an integral part of farming, yet these days, almost noone seems to know how to do it. As much as I like organic food, most of the organic farmers depend on conventionally produced seed for their vegetables and produce. Yes, the organic standards want farmers to avoid pesticides and chemical fertilizers, and no genetically modified organisms (GMO) are permitted.

That is all good, as far as I am concerned. But what we really need is organic farmers like Masatoshi Iwazaki, who has practiced organic agriculture and own seed banks in Azuma, Unzen City, Nagasaki for over 30 years. He is also the head of Slow Food Nagasaki.

Why is saving your own seeds so important?

In 1982, he started planting kuroda-gosun carrots, a variety native to Nagasaki, from his own seed selections. After a few years, he expanded to other varieties of vegetables and soon became hooked on the fascinating process. “True farming involves the maintenance and care of your crops over the entire lifecycle, from seed to flower to harvest and back to seeding again,” Iwasaki explained with passion.

The process of selecting your own seeds and strains is not easy and Iwasaki has encountered many issues over the years. For example, carrots selected for aesthetic appeal did not produce lots of seeds. Iwasaki says that plants are just like people. Just as there are many types of body shapes and sizes, healthy vegetable crops need to have a variety of properties. 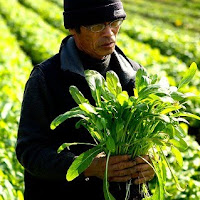 Iwasaki believes that in this modern day and age, as seed producers focus less on variety and more on standardization, diversity on the farm takes on two increasingly important aspects. One of these is breeding variety. For example, while we may think a turnip is just a turnip, there are in fact many types of turnip from all over Japan and this variety should be preserved and treasured.

The second is variety within each crop. Kuroda-gosun carrots may come in many shapes and sizes but all of these are important and useful. However, preserving both kinds of diversity is not the exclusive domain of the farmer, responsibility also lies with the consumer. If people take time out to purchase local varieties of vegetables and are tolerant of variety in shape and appearance then it will be easier for farmers to produce a variety of crops, including locally native plants.

I like this approach to organic farming, and I understand how important it is to save seeds. Yet, isn't it strange that so few farmers share the views of Iwasaki? In fact, faced with huge pressure to change Japan's trade rules, and even totally abandon local farmers with agreements like the Trans Pacific Partnership (TPP) to allow unlimited food imports, it would make a lot of sense to at least start to support organic farmers who know what they are doing.

This could then lead to export opportunities like what Iwasaki has found:

While local plant varieties have been decimated as farmers avoided crops that did not appeal to consumers, recently there has been a revival in popularity of traditional vegetables. Take, for example, Unzen kobu takana (mustard greens). This local variety of leafy greens was the focus of an editorial published by the Radish Boya vegetable delivery service. As it turned out, Iwasaki found a local strain and revived it. Iwasaki’s Unzen-kobu takana has now been certified by Presidio, one of Italy’s most prestigious slow food organizations.

Frankly, that is not the only good reason to support organic farming in Japan. You don't just want to do this to "create more farm export" but first of all, food security and self-sufficiency should be considered. Worst case scenario: Oil imports get too expensive, and difficulties in importing/producing chemical fertilizers and pesticides? Do we really have to wait until that point to start asking organic farmers how they think Japan should feed itself?

Each of us as consumers has the responsibility to think about where the foods we are eating come from and how they are grown. And the true value of food comes from knowing the story of our food and the people who produce it. More to follow!

Need green inspiration? Head over to Eco to Waza - not to be confused with greenz.jp (both good).

Piero Sardo, President of the Slow Food Foundation for Biodiversity, has just visited Nagasaki and had this to say:

Visiting the Unzen Takana Vegetable Presidium in the prefecture of Nagasaki, followed by a meeting of the local Slow Food convivium, was extremely encouraging and showed us just how aware people here are of the issue of food biodiversity. Thanks to the area’s unique geography, with a series of deep and twisting peninsulas, it has preserved a strong cultural specificity, protected from hybrids and contamination. The recently formed Slow Food Nagasaki Convivium has already firmly oriented itself towards promoting this specificity. It is not by chance that the first and only Japanese Presidium, for the Unzen Takana Vegetable, was established here. The group of women (the consortium of Moriyama processors) who process the vegetable using traditional drying and salt fermenting methods now find it easy to sell their product, which has found space on the shelves of Tokyo’s shops and airport boutiques. The Takana growers are equally satisfied, and they participated enthusiastically in the convivium meeting.

From Resistance in Japan: Food for Thought

Iwasaki Masatoshi, another Unzen farmer, has written a great book about Slow Food farming and the delishious, organic vegetables they make by saving and farming heirloom seeds for a number of different crops.

The book, published by Shinchosha, is called Tsukuru, Taberu, Mukashi Yasai (Make, Eat, Traditional Vegetables). Born in Nagasaki in 1950, Iwasaki has almost 30 years of experience as an organic farmer, and is one of the leaders of the movement in Nagasaki prefecture. Highly recommended!
Events farming Food Nagasaki Organic peak oil

Joan Lambert Bailey said…
Great piece, Martin. Seed-saving is one (of the many) things I'd like to know more about myself. I think it's pivotal for being a grower on any scale - balcony to garden to farm - and integral to understanding what it is that you are growing. I also really like the point about more consumer flexibility. So often perfectly good vegetables are deemed 'less than' at the farm I work at because the consumer won't accept something with too much of a curve or an odd shape. It seems a shame as the flavor and nutrition are just as spectacular.
3:32 pm, December 03, 2010

Martin J Frid said…
Thanks Joan, glad you liked it! Note that it has taken these farmers some 28 years (probably more) to get to the stage where they can save their own seeds properly. It is not as easy as it seems, but certainly a skill worth learning. I like things that are difficult!
12:11 pm, December 04, 2010

Pandabonium said…
Nice post. I like the cover of the book. Not only beautiful, but instantly conveys the biodiversity issue. Consumers (like me) get a set idea of what given fruit or vegetable looks like because big agra only offers a few examples. Another reason to buy local and in season when possible.

28 years? I doubt I'll live that long, but I hope enough younger people master saving the seeds of some crop or other and together keep the food coming.
6:03 pm, December 04, 2010