John & Yoko: Give Peace A Chance 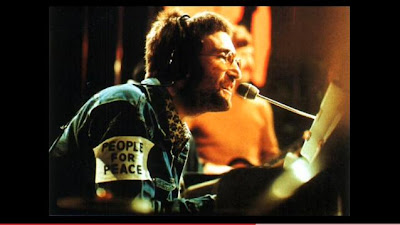 Hugsa ser frid. We take peace for granted, others do not. 30 years ago, I cried hearing the news that John Lennon was killed in New York City. Just could not believe it.

I was a child when the USSR invaded Afghanistan, and now, the United States of America and half of the rest of the world have been engaged in a war for a longer period of time in that country.

KABUL, Afghanistan (AP) — The Soviet Union couldn’t win in Afghanistan, and now the United States is about to have something in common with that futile campaign: nine years, 50 days. On Friday, the U.S.-led coalition will have been fighting in this South Asian country for as long as the Soviets did in their humbling attempt to build up a socialist state.

Associated Press: US presence in Afghanistan as long as Soviet slog (AP) – Nov 25, 2010

It does not make much sense.

War is over, if you want it.

The Imagine Peace Tower (Icelandic: Friðarsúlan, meaning "the peace column") is a memorial to John Lennon from his widow, Yoko Ono, located on Viðey Island in Kollafjörður Bay near Reykjavík, Iceland. It consists of a tall "tower of light", projected from a white stone monument that has the words "Imagine Peace" carved into it in 24 languages. These words, and the name of the tower, are a reference to Lennon's peace anthem, Imagine.

I dedicate this light tower to John Lennon

my love for you is forever

The Tower consists of 15 searchlights with prisms that act as mirrors, reflecting the column of light vertically into the sky from a 10-metre wide wishing well.[1] It often reaches cloudbase and indeed can be seen penetrating the cloud cover. On a clear night it appears to reach an altitude of at least 4000m. The power for the lights is provided by Iceland's unique geo-thermal energy grid.[2] It uses approximately 75 kW of power.

Buried underneath the light tower are upward of 500,000 written wishes that Ono gathered over the years in another project, called "Wish Trees". Ono plans to have the tower lit every year from 9 October, Lennon's birthday, through 8 December, the date he was shot. Iceland was selected for the project because of its beauty and its eco-friendly use of geothermal energy.

Since the 1960s, Ono has been an activist for peace and human rights. After their wedding, Lennon and Ono held a "Bed-In for Peace" in their honeymoon suite at the Amsterdam Hilton Hotel in March 1969. The press fought to get in, presuming that the two would be having sex for their cameras, but they instead found a pair of newlyweds wearing pajamas and eager to talk about and promote world peace. Another Bed-In in May 1969 at the Queen Elizabeth Fairmont in Montreal, Canada, resulted in the recording of their first single, "Give Peace A Chance", a Top 20 hit for the newly-christened Plastic Ono Band. Other demonstrations with John included Bagism. Introduced in Vienna, Bagism encouraged a disregard for physical appearance in judging others.

In the 1970s, Ono and Lennon became close to many radical leaders, including Bobby Seale, Jerry Rubin, Michael X, John Sinclair (for whom they organized a benefit after he was imprisoned), Angela Davis, Kate Millett, and David Peel. They appeared on The Mike Douglas Show and took over hosting duties for a week, during which Ono spoke at length about the evils of racism and sexism. Ono remained outspoken in her support of feminism, and openly bitter about the racism she had experienced from rock fans, especially in the United Kingdom. For example, an Esquire article of the period was titled "John Rennon's Excrusive Gloupie" and featured an unflattering David Levine cartoon.

In 2002, Ono inaugurated her own peace award, The LennonOno Grant for Peace, by giving $50,000 (£31,900) prize money to artists living "in regions of conflict." Israeli and Palestinian artists were the first recipients. The award is given out every two years, in conjunction with the lighting of the Imagine Peace Tower.[39]

On Valentine’s Day, February 14, 2003, on the eve of the Iraqi invasion by the Americans and the British, Ono heard about a romantic couple holding a love-in protest in their tiny bedroom in Addingham, West Yorkshire. She sent the couple, Andrew and Christine Gale, some flowers and wished them the best.[40]

In 2004, Ono remade her song "Everyman... Everywoman..." to support same-sex marriage, releasing remixes that included "Every Man Has a Man Who Loves Him" and "Every Woman Has a Woman Who Loves Her."

I like how Yoko Ono has created a Peace Tower in Iceland. Come and be inspired by Iceland, she says. "North is wisdom... and power, it spreads."

I like how Yoko Ono was able to rise above the racism in the late 1960s and early 1970s, finding her voice, and making a difference. I like how she managed to make miracles happen, after December 8, 1980.

I like how in December, you cannot go anywhere in Japan, shops or restaurants, and the carols are played, and then this tune comes on... For the yellow and red ones. Without any fear:

"An eye for an eye, will make us all blind." 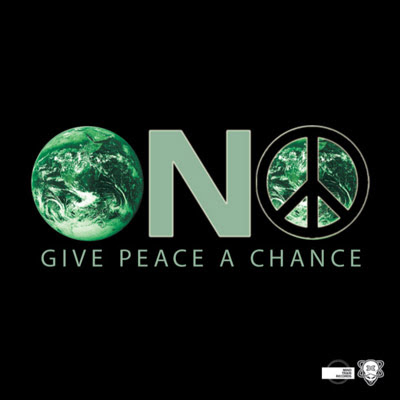 Frið or Frid, is my family name. In Swedish, it means "inner peace" and we also have the word Fred which means "peace" between countries.

Do think about that.

There is inner peace, and...

...another kind of peace; peace between countries.

Without "inner peace" how can we have peace between countries, in this world, on this beautiful planet.

the same people who funded and armed the mujahideen, creating the basis for al qaeda [Former British Foreign Secretary Robin Cook wrote that the word Al-Qaeda should be translated as "the database", and originally referred to the computer file of the thousands of mujahideen militants who were recruited and trained with CIA help to defeat the Russians.], were behind the political assassination of John Lennon, the arms for hostages, the Contra drug running/arm sales, the events of september 2001, Iraq war(s) and the new Afghan war. The people and their predecessors can be traced back through the decades for generations, war after war for profit and power....

or not. We can always be silent and accept the connections as mere coincidences in the grand "coincidence theory" of politics.

They all knew what they were up against. They also knew that achieve their dreams might require the ultimate sacrifice. We honor them by carrying on the quest for peace and justice; refusing to be silenced or intimidated.
1:55 pm, December 09, 2010