Japan: Eco-friendly Projects To Get Subsidies

The Japanese government will provide subsidies to 153 corporate investment projects that aim to contribute to reducing carbon dioxide emissions in the country.

As part of its emergency economic stimulus measures compiled last September, the government will subsidize domestic investment projects by up to 180 million dollars each. The assistance will target such projects as the construction of a factory that will manufacture lithium-ion batteries for electric cars.

The Economy, Trade and Industry Ministry has selected 153 projects as recipients of the subsidies from 285 applications. The selected projects include a battery maker's program to build a new plant and an electronics company's plan to boost production of semiconductors.

The government earmarked a budget worth about 1.3 billion dollars for such subsidies while the amount of such corporate investment projects totals about 6.4 billion dollars. Officials say the projects are expected to create about 95,000 jobs and that the economic effect will be larger than the amount of money spent on subsidies.

Do we really believe these government projects will help this country become more "eco-friendly" as they say? I would like to think so.

The companies are putting some serious cash on the table. 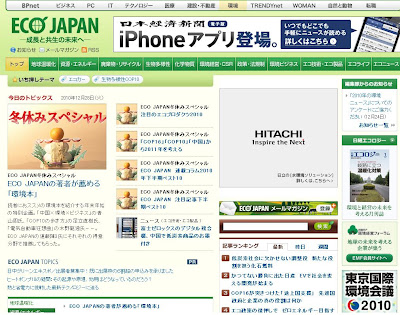 Nikkei is the news source for anyone who seriously cares about economic trends in this part of the world.

It is all in Japanese, but if that is not an issue, you know that all the major companies here have CSR reports in English.

ECO JAPAN is the website if you want to keep up with such stories.

If you think Japan is a leader in ways to create a sustainable future, you had better pay attention to news from companies here.

They invite you to subscribe to a number of different mail services, and a mail magazine. 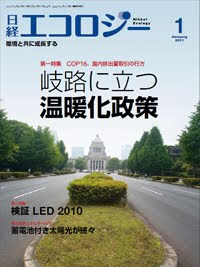 Nikkei Ecology is a new magazine, published from Dec. 12, 2010. Top stories include Access and Benefit Sharing (a major issue at the recent Nagoya conference on biological diversity).

Also, Nikkei is talking about measures to deal with climate change:

Pandabonium said…
What does "eco-friendly" mean?

I think not. This is 1984 style newspeak, designed to get support for a continuation of the capitalist system that exploits the finite resources of planet earth for profit.

Rationally, such things would be called "less environmentally devastating", not "eco-friendly". But that doesn't sell too well, does it? They still lead down an unsustainable path to utter destruction and collapse.

Okay, so Japan might reduce its carbon footprint slightly by way of this kind of subsidy of new techniques. But I return to my main point. Will it have a POSITIVE impact on the environment? Or just a slightly less negative one?

Pandabonium said…
Just to clarify - I am not singling out capitalism in this regard. Other economic systems also are destructive of our ecosystems.

Socialist/Communist systems are also based on a cornucopian view of endless resources. Historically, they have an even worse record regards the ecology.

I advocate a sustainable/durable way of life governed at the local level. How you attain that politically, I don't pretend to know, but I suspect it will arise naturally following the now imminent collapse of industrial civilization. The transition will not be pretty, but just because we don't like the aesthetics of history doesn't prevent it from taking place, does it?