Japan to Drill for "Fire-Ice" 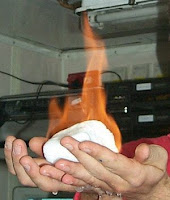 Japan imports almost all of its fossil fuels, including liquid natural gas (LNG). Gas represents 12 percent of Japan's energy (oil accounts for about 52%). At present, Japan buys gas from 12 countries and is supposed to add Russia to the list soon. Buying gas from Russia comes with the potential problem of Russia using the gas as a political lever as it has with its neighbors and Europe ("do as we say or we cut off the flow"). Notably, the scramble for gas is the source of one of Japan's biggest international relation problems: the dispute with China over the Senkaku Ilands.

Japan could put the emphasis on seeking sustainable alternatives while greatly reducing energy use in general (a strategy posed by Richard Heinberg at the Post Carbon Institute called "The Oil Depletion Protocol"). Instead, the focus has been to find more of the stuff.

Next year, Japan is going to start drilling in the Sea of Kumano off Mie Prefecture, not for natural gas, but for methane hydrate - methane gas which is trapped in water ice beneath the sea floor. Methane, once released from the ice, can be used in lieu of gas. It also comes with risks, since methane is a greenhouse gas that is 21 times as potent as CO2, so preventing any leakage is key. The process of doing this has not been perfected and there are many technical hurdles to overcome. Additionally, when you burn methane, while it does burn cleaner than coal or oil, it still produces CO2. However, the promise of a national energy supply is quite a lure and it has the Japanese government going after this fuel - in spite of the risks:

"Lucia van Geuns, an energy analyst at the international energy programme of the Clingendael Institute, said: "Methane hydrates could make Japan energy independent. Japan put a lot of R&D into this project because of course the less energy it imports the better. Whether they can commercialise methane hydrates remains to be seen." (emphasis added)

'Environmentalists, however, are concernedabout the burning of more earth-locked hydrocarbons. Methane may be a cleaner-burning fossil fuel than coal or oil but will still release many tons of CO2. Jogmec acknowledges the problems, admitting mining of methane ice could lead to landslides and the devastation of marine life in the mining areas. "There are many other technological problems to overcome," says the Jogmec website. "Not least that when you drill you create heat, which turns the frozen methane into gas, which could then leak uncontrollably through the sea to our atmosphere."'

"Japan's trade ministry, which is behind the scheme, has requested a budget of ¥8.9bn (£667m) for the drilling to start next spring. The huge budget reflects the difficulties of drilling deep offshore. In Japan, hydrates in the Sea of Kumano are found about 30km offshore in about 100 metres of water and at a depth below the seabed of 200 metres, making it difficult to mine the unstable hydrates."

Have you ever noticed how experts in the fossil fuel industry downplay risks (BP in the Gulf, Exxon in Alaska for example) and grossly overestimate the amount and benefit of the resource involved?

The Japanese Trade Ministry hopes to start commercial production of methane from "fire ice" by 2018. Given the ecological risks, the uncertainty that the plan will even work, and the fact that this is still just another nonrenewable "resource" which will contribute to climate change, I am against this project.
Isn't it time for industrial nations to end the oxymoron of infinite energy growth on a finite planet and start rapidly moving toward a truly resilient, biosphere-enhancing way of life? So far, Japan's Trade Ministry or any other country hasn't asked my opinion. An ironic twist is that this technology is coming very late in the energy game. Peak oil will most likely collapse demand for fossil fuels before the commercial exploitation of methane hydrate reaches a large scale. We'll suffer the economic consequences, which will be difficult, but we might end up saving the planet in the process.

Anonymous said…
I read about this 3 years ago, and they were saying then "commercial production by 2015."

Here's to hoping this venture keeps getting pushed back until, well... forever.

Martin J Frid said…
This is science fiction, glad you spotted it and pointed out the weakness of the logic behind it. I don't believe in coincidences, but funnily enough, I am currently reading Jack DuBrul's thriller "Deep Fire Rising" (2003) in which methane hydrates play a leading role: "I'm not an expert but I've read there's more than enough energy locked in these benthic hydrocarbon deposits to fuel our energy needs for centuries." Pulp fiction policies will save neither the planet nor the lifestyles of the rich.
12:08 pm, December 04, 2010

Pandabonium said…
kenelwood - yes, indeed. Apparently there has been some "success" and they are pushing ahead. The UN has been analyzing the pros and cons of this "resource" for several years now, particularly with regard to the melting of arctic ice. Their website about it is here: Frozen Heat.

Some estimates suggest there is more energy stored in hydrates than in all other fossil fuels combined. And that scares the hell out me.

Martin - no amount of energy is going to do anyone any good if the bioshpere is ruined. Policy should not be set by a limited focus group of chemists or engineers or CEOs. Where's the balance? Mankind has advanced tremendously on the technological level, but not so regarding the wisdom to use technology in an ethical, life sustaining manner. Until we change our economic paradigm and its position in our hierarchy of values, we will find it difficult to change anything else.