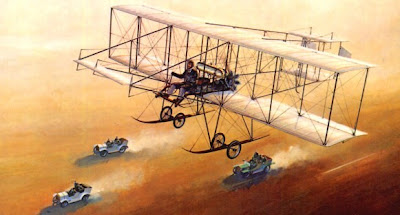 No aviation without brave pilots: There were people fascinated with flight even in the Edo period, such as Ukita Kokichi from Okayama, who made attempts at calculating what wingspan would be needed to let man soar like a bird, something he seems to have achieved in 1785:

Ukita studied how birds fly. He finally concluded, "Compute the ratio of the wing's area to the body's weight and use that ratio to create an artificial wing. Humans may use them to fly like a bird."

His skill of paperhanging was very useful for making wings. He made the wings' ribs of bamboo, covered them with paper and fabric and varnished the surface with lacquer from Japanese persimmons.

Fast forward to the late 19th century, and we have Chuhachi (Tyuuhaci) Ninomiya, who made paper planes that may have been able to carry a man. The first airplane flight in Japan was likely on 29 April 1891, when a propeller-driven unmanned plane took off and flew about 10 meters at a height of one meter and 36 meters at a height of six meters the following day. He even tried to interest the military, who thought he was crazy!

(Source: Russel Naughton website, quoting Japanese websites that unfortunately do not work, except the one that goes to the Hiko Shinto shrine that Ninomiya founded near Kyoto, to "pray for the repose of victims of airplane accidents around the world").

Around this time, in April, 1911, Yoshitoshi Tokugawa made the first flights at Yoyogi, Tokyo and Tokorozawa, Saitama, 100 years ago.

Top image by painter Shigeo Koike shows the then state-of-the-art French biplane designed by Henri Farman, used by Tokugawa in his pioneering flights.

There were several female aviators too that deserve to be remembered. Ninamiji Yone from Wakayama prefecture was the first Japanese female pilot, getting her licence at the Schiller Airplane School in the U.S. in 1912. I'm not sure about the name, could that be near the O'Hare Airport in Chicago? 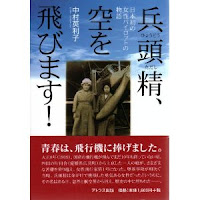 Hyodo Tadashi from Ehime prefecture is more famous, having gotten her licence in Japan, the first woman to do so.

This book, Hyodo Tadashi: Sora wo Tobimasu! has all the details about her and her young collegues.

She was the inspiration for a NHK drama in 1976, called Kumo no Juutan, which made lead actress Asaji Yoko famous.

In the drama, a 1936 Boeing A75 was used, with the registration number J-3641. A fast biplane that was sturdy and still used in the 1940s for what the agricultural chemical industries call "crop dusting" i e spraying dangerous pesticides on huge farm fields...

Apparently, the real airplane is exhibited in a Nasu, Tochigi prefecture museum dedicated to Japan's WW1 veterans. Looks like a rather unusual place, could be worth a visit, except here at Kurashi, we are very sensitive, or should I say strongly adverse, to war.

The airplane Ms. Tadashi used in 1922 (when she was in her early 20s) was a slender Curtiss JN-4 Jenny, according to the book.

I haven't found any images from that 1976 NHK drama series, but the OTS song is nice!


I think it is only fair to include two Korean female pilots from the pioneering era. There has been some controversy over a 2005 film called Blue Swallow, that dramatizes and romanticizes the (short) life of Park Kwang-yong:

24 July 1901 - 7 August 1933. Birth place: Taegu City Kyongsang-Do in Korea.
She was 168cm, which was very tall for women at that time. On 1 February 1926, she entered Tokyo Nippon Airplane school in Tokyo. In 1927, she got a third-class pilot license. When a reporter asked her about boyfriends, she answered "My boyfriend is my airplane." In 1928, she got a second-class pilot license. In 1933, she tried to fly over the Korean Strait, but she crashed into Gengadake Mountain in Atami city and died.

Why controversial? Because it turns out that Ms. Park was (probably) not first at all. That honour goes to Pyongyang-born Kwon Ki-ok, who instead of going to Japan decided to study aviation in China, graduating from the Yunnan Airforce School, affiliated with Chang Kai-chek, in 1925. She became a captain of Central Airforce of the Kuomintang in China, and survived WW2. The Blue Swallow film had to change some of its descriptions about Ms. Park, as the Korean public are very sensitive about any claims involving Imperial Japan...

Anyway, if you enjoy early era aviation as much as I do, here is the Blue Swallow trailer, with a lot of computer graphics to brighten your weekend!

Pandabonium said…
Great posts. Thanks for sharing some most interesting stories. Some comments...

The Schiller Aviation School was located in Venice, Calfornia, near Los Angeles. Many stunt pilots who flew for the movie industry were trained there.

The "Jenny" was used as a training airplane by the US Army during WWI and after war, they were sold off cheap. As a result many flight schools used them as trainers and barnstormers did stunts in them. Charles Lindbergh flew his first solo in one which he then purchased.

Stearmans are still used as cropdusters! After WWII people bought the big BT-13 Vultee trainers as well as the small engined Stearmans, then took the big 450 hp engine off the Vultee and mounted it on the Stearman.

I remember one on Maui in the 1990s which was still in use by the sugar growers. They are gradually disappearing as spare parts are difficult to come by.
1:04 pm, April 26, 2011

Martin J Frid said…
Panda - that's an entire post in itself, thanks for adding so much interesting information. The early airplanes were remarkable!