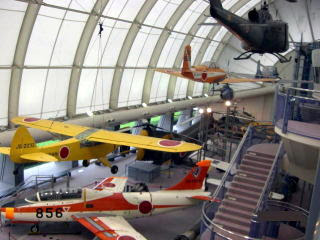 The first flights in an aircraft in Japan were made in Yoyogi, Tokyo and Tokorozawa, Saitama. Lieutenant General Baron Yoshitoshi Tokugawa studied aeronautical engineering in France, and showed what could be done with state-of-the-art aircrafts of the day in Tokorozawa, April 1911. In Tokorozawa, they are very proud of their history, as you will notice at the Koukuu Kouen Station on the Seibu line: they even have a cafe noting the 1911 event.

Do visit Tokorozawa, there is a lovely park with a museum that has some details of this amazing feat. The Aviation Museum is rather new, but in fact, this is the location of the Imperial Army Flight School that helped shape history in the 20th century. If you are looking for a day trip from Tokyo, the park in itself is worth a visit, and there are restaurants too. Easy access from Shinjuku or Ikebukuro, using the Seibu line.

On display both outdoors and inside the Tokorozawa Aviation Museum are a wide range of aircrafts, from every stage of development, up till recent jets. Do try the flight simulators! But what really fascinates me are the older flying machines. I had no idea that Japan had so many airplane manufacturers, and such a wide range of engines and types.

If you just want to go and watch modern commercial airplanes take off and land, then do take the brief Monorail trip to Haneda Airport. Before Narita, this was Japan's main gateway to the skies. Since 1931, it has carried all kinds of dignitaries to the city, like The Beatles in 1966, and the BOAC, SAS and Airoflot planes of that era. 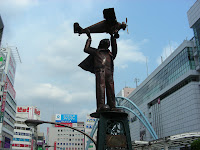 For Tokyo, the real deal used to be Tachikawa Airfield. Before Haneda, this was Tokyo's and Japan's early international aerodrome, as they were sometimes called back in the 1920s and 1930s. It played an immense role during WW2. But, as with other Tokyo airfields, it failed to protect the capital and the country from the WW2 air raids.

This is also the huge airfield that the Americans used for both the Korean and the Vietnam War. It was returned to Japan in the 1970s, and when I went there, I could hear helicopters, possibly on missions to aid earthquake survivors in Tohoku. There is a large Disaster Hospital, and still along the train tracks, you can spot many factories related to the old aircraft companies, like Showa, IHI and Tachikawa. The largest company here used to be Nakajima, but they were broken up after WW2 (into Fuji and Subaru). They still have warehouses and I was told there are a large number of vintage airplanes here, but not on public display.

In fact, there is very little in Tachikawa for the airplane aficionado. A large part of the old Tachikawa Airfield is now the huge park called Showa Memorial Park, from 1983. Its focus is - flowers. It has got to be the biggest park in Tokyo! It has dog runs, bicycle rentals, orienteering set-ups, ponds, and bird sanctuaries. You could easily spend an entire day there, forgetting you are still technically in Tokyo.

With the cherry trees in bloom, I'm glad I went, but I was also surprised how little remains of its aviation legacy. For that, the trip to Tokorozawa is much more rewarding.
Aviation Saitama Tokyo Transportation

Martin J Frid said…
Tokorozawa is worth a visit for the aviation museum and the small park, while Tachikawa just has a huge green park, bigger than anything I have seen in these parts (near Tokyo).
10:34 pm, April 16, 2011