Elderly Volunteers To Save Us From Fukushima Meltdown? 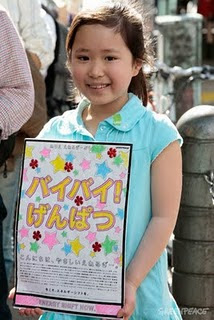 Possibly one of the most moving stories from Japan this spring, as TEPCO admits that at least three core meltdowns may have occured at the Fukushima nuclear plant. Meltdowns do mean we are in new territory, and there are no easy solutions. Asahi has more:

More than 160 elderly people have volunteered to brave high
radioactivity and help stabilize the Fukushima No. 1 nuclear power plant in
response to a call from a former engineer... Yasuteru Yamada, 72, who previously worked for Sumitomo Metal Industries Ltd., said people aged 60 or older must undertake the mission because their age means the adverse impact from radioactivity will be minimal. "Progress will be limited as long as workers have to change every few minutes, and a coordinated response cannot be expected even if robots are deployed," Yamada said.

"We have to come to the forefront because we accumulated technology and capability on the job and because we will be subject to small effects of radioactivity due to our age."

If memory serves me right, a similar thing helped The Ukraine deal with the Chernobyl disaster.

As the call for action spread, 165 people said they are willing to take part in his Skilled Veterans Corps as of May 23.

Yamada disputes the assertion that he is organizing a suicide corps, saying efforts
will be made to keep workers' exposure to radioactivity to a minimum. Yamada has contacted Diet members and Tokyo Electric Power Co., the plant's operator. He plans to press the government and TEPCO into action after enlisting more elderly people.

The plant needs systems for cooling reactors and spent fuel storage pools on a permanent basis. The task will involve work in places contaminated with high levels of radioactivity. Yamada has been receiving cancer treatments since a malignant tumor was found four years ago. He is in good physical health, but the risk for recurrence remains.

"I want to do my part so that a negative legacy will not be left for future generations," Yamada said.

Also, Ten Thousand Things have this from Fukushima: