Gorgeous, young, and from Venezuela. The Financial Times just hailed him as "The modern maestro" pointing out that classical orchestra conductors are no longer of the old breed, like Karajan, Haitink or Mravinsky... I did not know that conductors "did not exist until the mid 19th-century."

Only then did the rapidly growing size and sophistication of the orchestra necessitate that someone other than the principal violinist beat time  and coordinate the players.

Since the Ft.com does not like linking, I will not. Sad. Such great writing, on pink paper, not to be available to the reading, listening, thinking public. If they could explain why I should not quote, then so be it. I think the writers should protest, and the editors, and tell the owners of such great newspapers that we need to have them online, available, for the public good, for history, for democracy and for education.

"The seed was sown to flower again... The Lord of the harvest goes forth."

But hey, classical music will survive, even if newspapers do not. Their loss.

It should have come as no great surprise — especially now that the band has evolved from its youth orchestra foundations and with Gustavo Dudamel holding music directorships in both Los Angeles and Gothenburg – that this Mahler Resurrection Symphony was sensational . There were things in it that could probably only have been achieved in a space such as the Royal Albert Hall and in an atmosphere like that of the Proms. The sight of 14 double basses in four serried ranks was already imposing — never mind the panache with which they were played.

The National Youth Choir of Great Britain was magnificent, and Miah Persson’s soprano solos in the finale were as passionately radiant as her reputation would lead one to expect. As for her compatriot, Swedish mezzo Anna Larsson, she sang the Urlicht as though an angel had got into her.

Expectations: colossal. Achievement: beyond that.

Dudamel has a cool website. Do take a look. I learnt that in 2004, Dudamel was brought to international attention by winning the inaugural Bamberger Symphoniker Gustav Mahler Competition. His "early musical and mentoring experiences molded his commitment to music as an engine for social change – a lifelong passion." Or so his official website says. Quoting that, I hope I have not run counter to all the new and confusing rules and laws that seem to be proposed and imposed on our Internet. Resurrection, indeed.

Classical music is more alive than ever, do explore.

Another conductor that I like a lot is Neemi Järvi from Estonia. There is a connection. Both Dudamel and Neemi (and others) got their start as the principal conductor of the Gothenburg Symphony in Sweden, with a little help from Volvo, but that is not the point - classical music or any music for that matter requires sponsors.

What is unique of our era is that sponsors no longer matter, instead intellectual property rights, copyrights and all kinds of webs of legal entanglements made by record companies and law makers that don't know better have us all wondering if posting something on a blog is ok or not and while we have this amazing opportunity to get to be intimate with new, young, brilliant stars through the Internet, there is an effort to not allow the "resurrection" as it were, to happen.

What if I can not quote anything about these wonderful people, because I do not know if the text or music  files or whatever may be covered by copyright? Can I add a photo of the cover photo of the DVD? What is ok to copy and what is not... how on earth would the Internet function...? 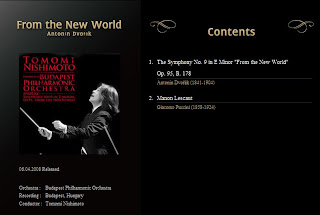 Here is a link to Nishimoto-san's blog.

Here is more about Ms. Nishimoto:

My Thoughts on the First Two Stops on My First Conducting Trip to the US: Conducting in Los Angeles and Orange County

I have always thought of English as the last language I would ever need to study.
Hence, I faced a big obstacle of communicating in the language that I was unfamiliar with. Thank you, Pacific Symphony Orchestra, for working through the language barrier with me and "feeling" what I was trying to tell you! I was very ecstatic to when I was told, "Come back again, soon!" Except when I do, I would definitely have had studied English a little more, just as I was subtly reminded to do so by my host.
And another thanks to the person who brought me beautiful flowers and told me that they became my "Newest Fan".
As a musician, I cherish my experiences of each and everyday.
Next, I will conduct at New York City’s Carnegie Hall where Tchaikovsky conducted the opening performance many years ago. What an honor it is!
Music Sweden Trombones

Keitaro Harada said…
Thank you for the mention ;)