Sign Of Relief: Hamaoka Not To Be Restarted, Soon 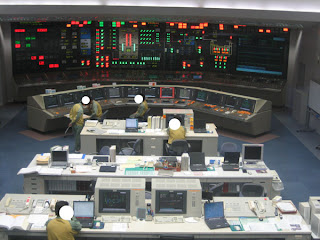 The Hamaoka nuclear power plant was the first one I was made aware of, and campaigned against, back when I was working on another project (about food safety and antibiotic resistance) for Japan Offspring Fund. Now I am pleased to hear that there is very little chance of it going back online. The Shizuoka governor seems to share the deep concerns not only about the earthquake fault it is on top of, but also the lack of tsunami protection.

Back then, I think it was 2005, we just thought there was enough evidence that that particular plant was unsafe.

Of course, after March 11, 2011, we know that massive earthquakes can cause massive damage, much worse than we could imagine, back then. Of course, the damage can be contained, and life goes on. But the Hamaoka nuclear power plant is situated at such a location that if a similar event to the Fukushima disaster were to strike, then Tokyo (and eastern Japan) would basically be cut off from Osaka (and western Japan). The Shinkansen and other important routes would be hard hit. Politically and in the sense of a national economy, it would split the country in two. Not acceptable. Of course, the farmers and people living in the area would also have to be evacuated, and this is a busy industrial zone with many important corporations...

Having said that, I am not sure we are about to convince the people who think Japan ought to restart all its 50 or so nuclear reactors, and get on with it. In fact, I'm curious to hear from the pro-nuclear people, just which reactors they think Japan should restart, and which to not restart? Should Hamaoka be restarted?

Come on, give me a list, which ones do you think ought to be restarted?

Currently, end of June, 2012 no nuclear power plants are on line, an amazing state of events for one of the world's top economic powers. (We are doing OK, by the way, in case you were wondering!)

Meanwhile, massive protests against the Oi reactors in Fukui prefecture, with some people in Kyoto, Japan's main tourist destination nearby, noting that they have no real plans if disaster would strike.


Shiga Gov. Yukuko Kada accuses Prime Minister Yoshihiko Noda of emphasizing plant site safety to the exclusion of any discussion of safety procedures in the communities surrounding the plants.
"They still ignore the residents, and that's what angers me most," said Kada, an environmental scientist and independent politician.
Kada said Noda's government has refused to provide radiation simulation data that she has requested to compile an evacuation map and study the impact of radiation on Lake Biwa, where monitoring stations still need to be installed.
"I'm horrified by the thought that another Fukushima-class crisis could instantly make the lake water undrinkable," she said.
The neighboring city of Kyoto — Japan's biggest tourist destination — has only a tentative crisis plan, and its first-ever drill is still three months away, city disaster manager Fujio Yoshida said. Its contingency plans need to take into account a large number of foreign visitors, he said."Until Fukushima, we never imagined radiation reaching our city [Kyoto] or the need for crisis plans," he said.

Also in the news, the proposed Kaminoseki nuclear reactors in Yamaguchi prefecture, which have not yet been built, may have been halted. I blogged about the film Ashes to Honey, the third film on the global nuclear issue from acclaimed director Hitomi Kamanaka, Japanese title ミツバチの羽音と地球の回転 (Mitsubachi no Haoto to Chikyū no Kaiten, 2010).

You could probably make an amazing, fantastic film about just about every nuclear reactor that has ever been built, around the world. Each one must have gone so many secret and public processes. Some have been built after paying off the locals, other are strongly supported because they provide jobs, and some are now in question because they may be unsafe. I'm reminded of the legal concept of "reasonable doubt" and of course the "precautionary principle" but is it enough? We do not seem to have a moral or ethical way to deal with nuclear power plants. We just ignore them, and hope they are safe, but then, when they are not, what can we do?

Update: I just noticed that I actually noted Kamanaka's first film, about Japan's nuclear reprocessing plant in the village of Rokkasho in Aomori Prefecture here on Kurashi back in 2006.

Image of the Hamaoka nuclear plant control room, with faces blocked out for privacy, from the Chunichi.co.jp blog by Fukuoka Yumio (J), who visited Hamaoka in March, 2010, and who asked the very good question, if we really should continue to be あいまい aimai (vague) about how Japan should supply its energy.


So which of the country’s 50 reactors are safest to operate?
A bipartisan group of 10 lawmakers– all of whom support reducing Japan’s reliance on nuclear power– looked into that question. They ranked the reactors by nine criteria, including reactor age and type, accident records, average operating rates, quake vulnerability and proximity to large population centers.
They found the 10 safest reactors are run by three utilities — Kyushu Electric Power Co. (6), Shikoku Electric Power Co. (2) and Hokkaido Electric Power Co. (2). They are the smallest of Japan’s 10 utilities, and their plants are relatively new, and located far from large cities.
The worst performer is Japan Atomic Power Co.’s Tsuruga No. 1 reactor, which was recently found to have an active fault running right underneath.
Tsuruga is followed by Oi Nos. 1-2, Mihama Nos. 1-3, and Hamaoka Nos. 3-5. Of the worst 10, five are owned by Kansai Electric Power Co., and three by Chubu Electric Power Co., the nation’s second and third largest utilities. The still-operational reactors of Tokyo Electric Power Co., which runs Fukushima Daiichi, came in toward the middle of the rankings. But all Tepco’s reactors were on a second list of facilities the lawmakers thought should be scrapped, based on the risks of future earthquakes or damage done by recent quakes. Tepco’s remaining reactors have all suffered damage from earthquakes in 2007 and 2011.
The bottom 10 ranking reactors are all 30 years old or more, except for the three Hamaoka reactors, which are newer but sitting in a region with a high risk of being hit by a Magnitude 8 earthquake.

Tom O said…
I think a (VERY sensible) term we may be looking for here is 'Once bitten, twice shy'. Why make the same mistakes again with the same drastic consequences to take into account.. Mirai wa mirai...
1:46 am, June 27, 2012