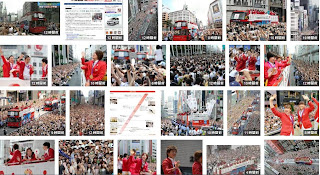 It has been an amazing summer. I'm just back from London, having seen the best (and some of the worst) of the old Roman city by the Thames, in a country that keeps on rising to the occasion. Absolutely marvelous, as it were. Today, back in Ginza, Tokyo, some 500,000 people showed up to greet the medalists from the Olympics.

The 38 medals won at the London games were the most ever by a Japanese Olympic team.

It has been that kind of summer. Protests against nuclear power in Tokyo and Kyoto and elsewhere in Japan. Thousands of young people educating themselves and others about energy issues. Energy prices and food cost of course going up? The UK customers are facing higher heating bills, and the winter of 2012 could be harsh.

As the red bus passed Hyde Park and Speakers Corner, I was surprised how that particular spot was empty of people with an issue. Rather, that entire park area is now full of war monuments. The scars from last year's Reclaim the City protests, and other more sinister events, such as the bus bombs back in 2007 and before that in 1996, made me wonder how the UK have managed to keep its stiff upper lip. Japan, meanwhile, has avoided similar faith except for the 2005 gas attack by the Aum sect that noone seems to be able to understand/explain.

A summer when 500,000 people are ready to cheer for Japan? I like it. Give credit when credit is due. But it still has to translate into action, such as eating healthier food, avoiding household chemicals, reducing energy use, and not having illusions about a return to the bubble economy some 25 years ago. Same thing applies tot he UK, that got to bite the bullet back in 1976, as it turned to the International Monetary Fun (IMF) for a massive bailout of Greek proportions:


As pressure on the pound continued, the government approached the IMF for a loan of $3.9 billion in September 1976. This was the largest amount ever requested of the Fund, which needed to seek additional funds from the US and Germany. The IMF negotiators demanded heavy cuts in public expenditure and the budget deficit as a precondition for the loan. Healey's proposals for a cut of around 20 per cent in the budget deficit were hotly debated in Cabinet [...] Eventually they acceded, as it seemed likely that the refusal of the loan would be followed by a disastrous run on the pound. Healey announced the forthcoming reductions in public expenditure to the House of Commons on 15 December 1976.

Following the agreement with the IMF, the overall economic and financial picture improved. Interest rates were soon reduced and the pound quickly appreciated in value. By the end of 1977, partly as a result of new oil revenues, there were improvements in the balance of trade. Britain did not need to draw the full loan from the IMF. Nevertheless, the IMF crisis reinforced a change in policy orientation away from full employment and social welfare towards the control of inflation and expenditure.

The National Archives: Sterling devalued and the IMF loan

And by summer of 2012, talking of economic growth is more difficult than ever, as we have 7 billion people on this planet, with all kinds of religious and territorial issues and claims. I have some small hope that women will rise to the occasion, as 2,000 years of male-oriented policies have made such a mess. Having said that, I will keep on cheering for Japan, and Korea, and China and India, and elsewhere if I can find a good cause.