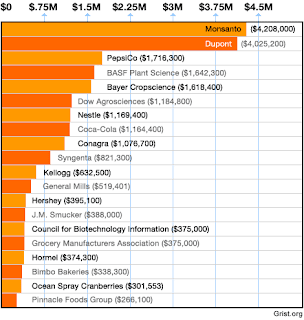 GMOs are properly labelled in Japan, and in the EU.

Grist, a source of news that I like a lot, says:


As the battle to get genetically engineered foods (or GMOs) labeled in California — a battle that could very well have an impact on labeling nationwide — heats up, Big Food and Big Ag are working in concert to push back to the tune of $25 million.

The fight centers around Proposition 37, the ballot initiative from the Right to Know Campaign that will go to vote in November.
If it passes, the result would be no small change.

Since GM corn, soy, sugar beets, and cotton (the oil part) are processed into sweeteners, fats, and other additives that suffuse the US food system, the initiative would require the labeling of something like 80 percent of all non-organic processed food sold in supermarkets.

As you can see in the chart below, The “Big 6” pesticide makers (BASF, Bayer, Dow, Dupont, Monsanto, and Syngenta) are putting up big money — especially Monsanto and Dupont (full name E. I. Dupont de Nemours). That’s because all of the Big 6 either produce GMO seeds themselves, or pesticides that work in concert with the seeds, so they have the biggest vested interest in seeing GMO proliferation fly under the radar of most Americans.

This of course applies to Japan and Korea and other countries that import soy and corn from the US.

Where is the money going, exactly? Many of these companies are paying the same consultants who worked for the tobacco industry to create “astroturf,” or fake grassroots groups that will do their best to make it look like there’s a big crowd of citizens who think labeling is a bad idea. And they’ll undoubtedly convince many voters. This Reuters article that ran yesterday predicts a close battle.

By Lisa Baertlein and Carey Gillam

(Reuters) - After two decades fighting to force U.S. food companies to tell consumers when their products are made with genetically modified organisms, activists in California have mounted what is potentially their most promising offensive to date.

In November, voters in the nation's most populous state will decide whether to require labels on food and drinks containing so-called GMOs, or ingredients that come from plants whose DNA has been manipulated by scientists.
To fight the initiative, seed giant Monsanto Co, soda and snack seller PepsiCo Inc and other opponents of the labeling measure have put up $25 million already and could raise up to $50 million.
Foodmakers, like carmakers, know that what starts in California has a fair chance of becoming the national law, or at least the national norm.
Unbeknownst to many Americans, some of the most popular U.S. GMO crops -- corn, soybeans and canola -- have been staple ingredients for years in virtually every type of packaged food, from soup and tofu to breakfast cereals and chips.
Supporters of the ballot initiative, who include food and environmental activists as well as organic growers, say consumers have the right to know what's in the food they eat and want GMO products cut from the food chain.
A "yes" vote from the Golden State - home to about 10 percent of Americans - could upend the U.S. food business from farm to fork if it prompts makers of popular foods to dump GMO ingredients.
"If a company like Kellogg's has to print a label stating that their famous Corn Flakes have been genetically engineered, it will be the kiss of death for their iconic brand in California...and everywhere else," supporters said in an email seeking donations.
Experts say that campaign bluster might just prove to be true. Polls suggest the labeling proponents could win the vote.
"Ballot measures are the only way to get something like this into law in the United States," Wellesley College political science Professor Rob Paarlberg said.
MONSANTO LEADS COUNTER-OFFENSIVE
Time and again, labeling measures have been soundly defeated in state legislatures because food companies and farmers are well represented by lobbyists, experts said.
Food companies, which a decade ago pulverized an Oregon GMO labeling ballot initiative effort, say labels inaccurately imply that GMOs are not safe and that they are akin to putting a skull and crossbones on food packages.
They call the California measure "flawed and poorly drafted" and say it will raise grocery prices and open food companies and farmers to frivolous lawsuits.
Money is flowing in from around the country and opposition fundraising is outpacing that of supporters by a factor of more than eight-to-one, according to filings with the California Secretary of State.
Contributions from PepsiCo, Kellogg Co, Hershey Co, Hormel Foods Corp, General Mills Inc, Pinnacle Foods Group, Cargill Inc and ConAgra Foods Inc have come fast and furious in recent weeks.
But the big money is coming from the likes of Monsanto, the world's largest seed company and the first to introduce genetically engineered products to farmers.
Its $4.2 million donation is the largest single gift and bolstered other million-dollar contributions from fellow biotech firms like DuPont, Dow AgroSciences, Bayer CropScience Ltd and BASF Plant Science -- which recently announced plans to move its global headquarters to the United States from Germany.
More than 40 countries around the world already have some requirements for labeling of genetically engineered foods. GMOs are deeply unpopular in Europe, which has strict labeling rules and bans many genetically engineered crops.
Because GMOs are widely used in North America, the region is a key market for the biotechnology companies mentioned above -- many of which are divisions of multinational chemical companies.
MIGHT BE CLOSE BATTLE
While Mother Nature does her share of genetic engineering, human interventions have specific goals, such as increasing crop yields or helping plants survive droughts or attacks from pests.
Institutions like the World Health Organization say GMOs pose no risk to human health and that they are essential to producing enough food for the world's booming population. But critics say studies are mixed and that more investigation is needed.
U.S. regulators do not require independent safety testing of GMOs, relying instead on data supplied by developers of those crops. Because foods made with GMOs are not labeled, it is impossible to trace any food allergies or other ill effects suffered by humans or animals, critics say.
In recent years, several scientists have raised alarms about what they say appears to be a growing pattern of problematic health and environmental effects.
Most large food companies aren't headquartered in California and the state's farmers aren't dependent on soy and corn, the "Big Two" GMO crops. That makes the Golden State an ideal place for an aggressive labeling push, Paarlberg said.
Jonathan Foley, director of the Institute on the Environment at the University of Minnesota said California law "by default, is essentially a national law" and believes this labeling measure has a good chance of passing.


Image: Here’s a breakdown of the 20 largest donors as of Wednesday, Aug. 15:
Consumer rights GMO