June 25, 2013
Interesting to note that people are delaying the time of their marriages, both in Japan and in Sweden (and I suppose in many other countries). 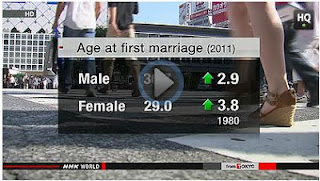 A government report shows more Japanese people are waiting to get married or have children. The report said in 2011, the average age at which Japanese men got hitched for the first time was 30.7, and 29 for women. That's 2.9 years higher for men and 3.8 years higher for women compared to 1980. It also said that the average age for a woman to give birth to her first child was 30.1, exceeding 30 for the first time ever. It rose by 0.2 years compared to 2010. 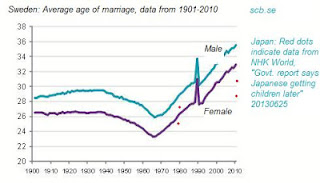 The Japanese marriage curve change seems to be following exactly the same curve as that for Sweden. Except, Japanese still marry about three years earlier, on average. No comment about that on NHK World, but you'd rarely see any such analysis on Japanese news. Anyway. We know that there are a tremendous amount of environmental chemicals and toxins around, and it would make sense if women had babies much earlier, say, in their teens, not later.

Graph lifted from Statistics Sweden, a government agency with a terrific English website (if you care to know about things like Swedish harvest of fuel peat and whatnot) with my added points.

Pandabonium said…
For the sake of the planet and resilience of humanity going forward, the fewer births the better - especially in industrialized countries that use the most resources and create the most pollution.
7:49 am, June 29, 2013

Unknown said…
Some Japanese women start to look for a date with American men because they think a child with Western men is always so adorable, and they just want a baby with them. You can also see the most of children models on Japanese magazines ads are mixed race children of Japanese and a foreigner. Some women in Japan are desperately to have a cute baby with a foreigner!