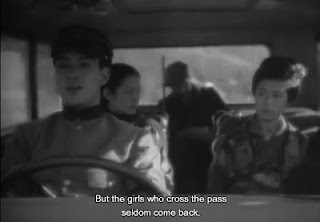 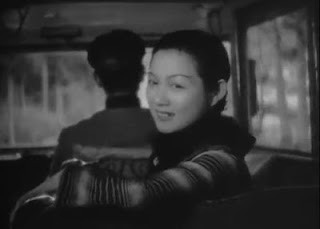 Do catch this black-and-white film from 1936, directed by Shimizu Hiroshi. A simple bus ride from a rural town with a cheerful driver, popular with everyone he meets, but the story has much more to tell us.

Mid 1930s were recession times, which meant young women who did not marry could only find work in the big cities, at paper mills or work of a kind that could not be mentioned. 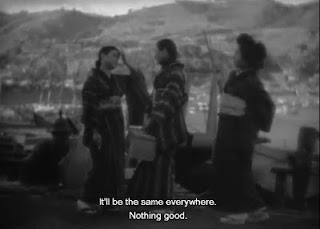 The story also hints at the plight of out-of-work males who went back to their home towns, and migrant women who followed construction crews around as they built roads, tunnels, railways in the countryside...

I like the subtitles, they are terrific - except perhaps in the choice of the English word "migrant" for wataridori 渡り鳥 (migratory birds) because that is also mentioned, that such birds, they will return...

Yet the sense of warmth is strongly communicated, and there is the jazz music and the scenery and the smiles and the kids and the narratives.

Do watch before you comment. A rare glimpse into a Japan most of us cannot imagine. You get points if you can identify the route!

Based on a story called "Arigatou" by Kawabata Yasunari. Mayumi Tsukiji plays the 17 year old girl who travels with her mother to Tokyo... Ken Uehara is the bus driver.

The first road movie, ever...?

Pandabonium said…
Good stuff. The scenery and music are a treat and the story weaves a surprisingly rich tapestry of the various characters encountered along the way.

The dirty old man with the fake mustache is so funny, he reminds me of Arte Johnson on Rowan and Martin's Laugh In sitting next to Ruth Buzzi on a bench and asking "Want a Walnetto?".

I don't know what the route was, but perhaps from Izu Penninsula to Tokyo? A man wanted the bus to Shimoda early on and Amagi was mentioned - Amagi Mountains?

Martin J Frid said…
There is a lot to like. And yup, it is a trip from Izu, Shimoda by the way is where Comm. Perry and his ships anchored for a long time in order to get a message across to the Edo bakufu - Edo (Tokyo) did (does) not have a deep enough harbour for ocean going ships, which is why Yokohama was created in the late 19th century.

Pandabonium said…
That is a nice tune. I just noticed the two people he passes at about 9:04 - someone pedaling a bicycle pulling a wide trailer with passenger. The shape of things to come!
3:51 pm, June 20, 2013