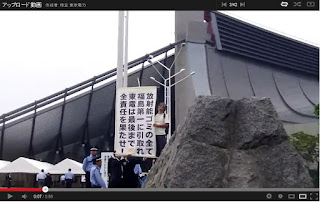 Yesterday, at Yoyogi Stadium in Tokyo, TEPCO held its annual meeting and there were a lot of protests. This is the utility that brought us the nuclear crisis after the earthquake and tsunami on March 11, 2011, with meltdowns at three of its nuclear power plants. Still not under control, still leaking radioactivity, and so far some 3.79 trillion yen ($38.9 billion) by the government spent to settle compensation claims from the nuclear disaster, i. e. have been injected from tax payers to keep TEPCO afloat.

At the annual meeting, stock holders got to file motions, including Greenpeace Japan, that tried to raise the issue of the responsibility of companies that supplied parts to the Fukushima Daiich Nuclear Plant, including General Electric, the US company. All such motions were voted down. 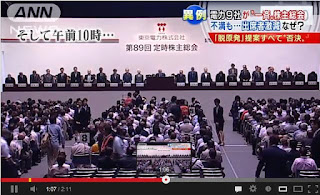 “It is very important to find how much GE knew about issues that may lead to accidents and how much GE has tried to remedy them in order to find cause of the accident and to determine responsibility,” Greenpeace campaigner Ayako Sekine said at the meeting. “At this moment, only Tepco is paying the compensation. But this isn’t enough for the victims to reestablish their lives.” Tepco’s board had recommended that shareholders reject the measure, arguing that there was no clear basis to pursue claims.

Other protests were held outside. Image from Youtube, Shareholder TEPCO.

Video (J) of the proceedings and protests at the annual meeting: ANN News.