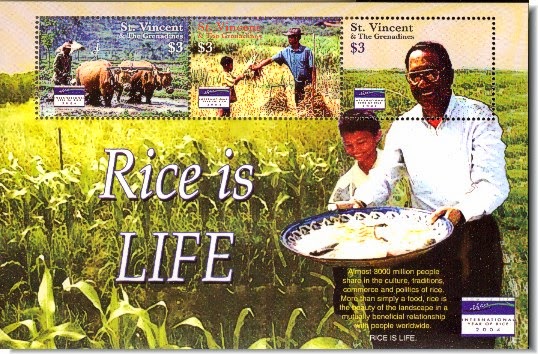 I'm just back from another great meeting in the Philippines, this time with Masipag, one of the main NGOs that work on farming issues in Asia.

Masipag is highly critical of the International Rice Research Institute (IRRI) and has pointed out that it is increasingly becoming a "for-profit" body in spite of its original mandate. Masipag wants rice farmers to have control over their many varieties, be it white, red, yellow, brown or black rice, and all the other amazing kinds of rice that rural farmers have been saving and enjoying over centuries.

"Rice is life" is a rallying call, and you could translate that as, "Don't mess with our rice."

The problem in South East Asia is that, farmers are asking: Who are these guys, the Syngenta corporate guys in their corporate headquarters in Switzerland? Why do they want to tell us how to grow rice? Who do they think they are? Do they think they know better than a hundred million rice farmers in Asia?

I don't know if it is racism back in Bern or Zurich, but I have a feeling that they don't eat a lot of rice. So, is it all about share holder profits?

They may think they know better. White people do tend to have that idea from time to time... Ahem. ...


So why are these people in Europe and North America so hell-bound on introducing patented GMO rice in Asia?

There are all kinds of other issues with Syngenta, such as their toxic Paraquat pesticides, and their history as a chemical company. Pesticide Action Network Asia Pacific, PANAP, has much more.

Paraquat is banned in at least 36 countries including Switzerland, Syngenta's home country, and restricted in other countries. Both Sri Lanka and China have imposed restrictions on certain formulations.

In December 2011, Syngenta along with other agrochemical transnational corporations were found guilty of gross human rights violations by a Session of the Permanent People's Tribunal.

From Huffpost Hawaii: The Difference between a farmer and a global chemical corporation:

Syngenta was formed through the merging of pharmaceutical giants Novartis and AstraZeneca's agrochemical lines. They manufacture highly dangerous pesticides like paraquat and atrazine that are banned in their home country of Switzerland, but used largely in poorer countries (as well as Hawaii). Paraquat is a major suicide agent. Syngenta has lobbied exhaustively in the European Union to block a ban on its bee-killing neonicotinoids, including threatening to sue individual EU officials. It has hired private militias to murder farmer activists. Syngenta is responsible for 18 Superfund sites in the US.

We have recently gotten the Swiss banking system to become more accountable. What about their chemical corporations? What about their push from toxic chemicals to genetically modified organisms?

Syngenta is heavily involved in trying to profit from the genetically modified rice that we discussed in the Philippines.

Syngenta calls it "Golden Rice" but we do not want to call it anything but "Fool's Gold Rice" or "Toxic Rice" or "Jaundice Rice" as the proponents of GM rice have already made it clear that they will use it, no holds barred, as their public relations tactic.

What I felt at the conference in Manila was a strong resentment among farmers in Asia that a small group of anonymous white people in their board rooms in a small country in Europe with no accountability are making decisions about their precious Asian rice.

"The farmers are at the front line..."

"We are all interconnected..."

"Let us not allow corporations to control our rice."


公開日: 2014/04/23
MASIPAG is a network of farmers' organizations, NGOs and agricultural researchers in the Philippines, working towards farmer empowerment, food security and sovereignty through their leadership in the use and management of biodiversity, sustainable agriculture, farmer training and advocacy, local processing and marketing, and participatory guarantee systems.

Elizabeth Cruzada is a development practitioner who has worked primarily with organizations and communities of small farmers and women activitists in the Philippines. She has been actively involved in people's empowerment processes through participatory action research, leadership and capacity-building, organizational development and advocacy. In Masipag, she is currently handling organizational management aspects of the network.