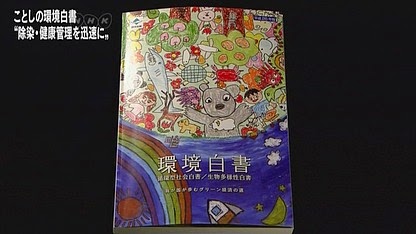 Japan's Environment Ministry has released its annual report and notes that "the release of radioactive materials following the 2011 Fukushima nuclear accident remains Japan's biggest environmental problem, " according to NHK World. Little surprise there, but good to note that it is put squarely on the agenda and not swept under the carpet...

The report says building intermediate storage facilities for contaminated soil and other waste is essential to speed up the decontamination work and promote reconstruction.
The government plans to build such facilities near the Fukushima Daiichi nuclear power plant.
The report also says determining amounts of radiation exposure is important for managing the health of residents. The report points to the need to provide better information to alleviate their concerns. It notes Fukushima Prefecture's efforts to train personnel for health consultations.
The white paper also calls for rapidly moving ahead with environmentally friendly programs to reconstruct the affected areas.
It cites the prefecture's solar power generation program, which solicits funding and other forms of participation by residents.
A village in the prefecture plans to construct renewable energy facilities as a pillar of its community rebuilding efforts.

Meanwhile, efforts to assess the accident's health effects continue. Large scale screening of children in particular is a main concern. As noted recently in The Lancet, regular thyroid examinations began in April, 2014, and will be compared with these baseline data. But how to study this properly?

The Fukushima baseline survey showed an unexpectedly high prevalence of thyroid cancer: 33 confirmed cases and 42 suspected cases among 269 354 children...  Of these 75 children with thyroid cancer, 34 were operated on. According to Fukushima prefecture screening is their responsibility, but treatment plans are entirely the responsibility of hospitals, where the risk of overdiagnosis might not have been properly taken into account.

The Lancet: Time to reconsider thyroid cancer screening in Fukushima

Hinan Kenri, a network of public health experts, pediatricians and NGOs are meeting today in Tokyo to call for better screening and more efforts to help the people in Fukushima. They are publishing their appeal in English, German and Russian and want your help to get these issues known around the world.

You can also support their Avaaz.com petition here