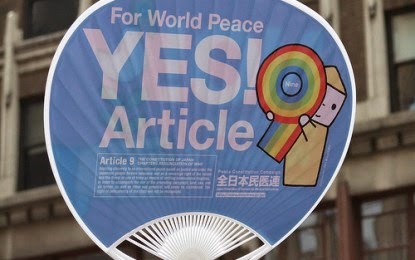 I wish more people abroad would pay attention to the many grass root efforts here, because there is so much going on. The debate about Japan's constitution is a case in point. This is a huge issue that so many people care about.

Update: Ten Thousand Things has much much more details about this event!

The Article 9 Association is part of that movement - and didn't I read somewhere that they have been nominated for the Nobel Peace Prize for their efforts? I should google before I write more about that!

The Article 9 Association is a much larger effort than its website - that clearly shows that they don't have access to all the latest bells and whistles when it comes to online campaigning. Many of the people behind this are old hands who do actually remember the war - and the peace.

Japanese website here, with posters, updates, and promises of translations to Chinese, Korean, French... they clearly started out with the greatest of ambitions. Hey, there are lots of foreign students in Japan who could be recruited to do their internships and help out! Since this is a proper association with a legal status, all it would take is a couple of dedicated individuals to make the effort.

To read their English newsletters, you have to go to the link below, and then open each Word file, one by one:

Please, please, someone create an index or some kind of structure with - information? But I know the problem. No money, no time. And the world keeps wondering if Japan is really for peace or not. Internet? Not so sure about it.

But isn't that rather reassuring?

These people over at the Article 9 Association do their work the old-fashioned slow and steady way, and have some 7,500 local chapters since inception in 2004, according to NHK World:

Article 9 Association marks 10th anniversary
Supporters of Japan's war-renouncing Constitution have held a rally in Tokyo. They oppose changing the interpretation of the Constitution to allow Japan to exercise the right of collective self-defense.
About 2,000 people took part in the rally on Tuesday, which marked the 10th anniversary of the foundation of a group to defend the war-renouncing Article 9.
Nobel Prize-winning novelist Kenzaburo Oe told the crowd that the government's move to enable Japan to invoke the right of collective self-defense must be thwarted.
Quoting the late critic Shuichi Kato, one of the group's founders, Oe said preparing for war will bring it closer.
Oe warned that giving up Article 9 means denying people the right to choose war or peace. He said the interpretation of the Constitution should not be changed and the ban on the use of the right of collective self-defense should be maintained.
A woman in her 50s said she wants Prime Minister Shinzo Abe to be aware of the people's determination to defend Article 9.
A college student said he opposes the re-interpretation of the Constitution, adding that he has realized how important it is for young people to be more engaged in politics.
About 7,500 similar groups have been established across Japan in the 10 years since the Article 9 Association was founded.