Who Can Help Volvo Get Paid By North Korea? 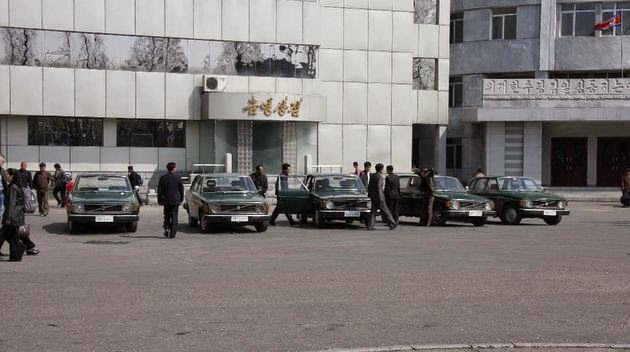 This is such an epic story of the early 1970s, back when the Cold War was seriously on. Sweden was supporting Vietnam, and - hey, why not North Korea as well? There was a trade fair in Pyongyang and Volvo, Atlas Copco and Kockums participated (Atlas Copco for the minerals that now China are eying, but that is another story, Kockums from Malmö, for ship building, I suppose...)

Somehow, North Korea managed to manipulate the Swedish government and its foreign trade body to supply some 1,000 green Volvo 144 Sedans. With leather seats.

Oh, I remember those, they were considered large by usual Swedish standards back when I was a child in the 1970s. As I have noted earlier on Kurashi, we had a Renault 4 no more no less, until father caught on and got a Toyota Starlet in 1981. Volvo? That was for more affluent neighbors. The Volvo 144 Sedan was - luxury. And that is the very car Sweden decided to export to North Korea. And North Korea decided not to pay. Turns out, they are still around. Most serve as taxis. They are more or less indestructable. Compared to Cuba, North Korea may be lucky. Still, I'd like to know exactly why they thought they didn't need to pay.

North Korea will always have reasons for how they behave.


Each fiscal year, the Swedish Export Credits Guarantee Board calculates interest on a single debt that accounts for more than half of all its political claims. It’s been a tradition since 1974, when the government agency was advised to insure Volvo, Atlas Copco, Kockum, and other Swedish companies’ exports to an entirely new buyer: Supreme Leader Kim Il-sung. For nearly half a century, the Board has been in charge of the Sisyphean task of coaxing €300m from a nation that thinks international law is an elaborate gambit designed by capitalist pig-dogs.

“We semi-annually advise when payments fall due,” Stefan Karlsson, the board’s head of risk advisory, tells Newsweek. “However, as is well known, North Korea does not fulfil their part of the agreement.” Sweden being Sweden and North Korea being North Korea, that’s about as hardball as it gets.

It was a very different world back then, before South Korea started to make the headlines. Who's competitive? In 2014, South Korea ranks 26th, and China was up by one notch to 28th. Well done. The World Economic Forum ranks Japan as the world's 6th most competitive economy, up 3 places from a year earlier. And maybe, Sweden will somehow reap amazing benefits from trade with North Korea, in the future...?

OK, but can we get back to the story abut the Volvo 144 Sedans in North Korea, please?

The story began shortly after the Korean armistice of 1953. As the line dividing north from south grew firmer, other borders became more porous, drawing the attention of many neutral European countries. The Iron Curtain rose on an entirely new part of the tumultuous era’s geopolitical zoo: a tiny, ebullient state marked by military posturing and dreams of self-reliance, running an impressive surplus and recording a mind-blowing economic growth of 25% in the face of US opposition.


Sweden was one of the first to seize on the opportunity. The Stockholm and Pyongyang ties in the early 1970s arose out of a rare convergence of leftist and industrialist interest: local socialist groups wanted Sweden to formally recognise the new communist state, and businessmen wanted to exploit the region’s nascent mining industry.

Not like we did not know about this in Sweden, for a long time...

While many companies pressed on with payment negotiations in an effort to save face, Swedish media was having a blast unraveling one of the most bizarre trade debacles in recent memory. In an indignant spread featuring a photo of the supreme leader with the caption “Kim Il-sung – Broke Communist,” Åge Ramsby of the newspaper Expressen in 1976 went all out listing reports of other debts the Kim regime shirked, including a cool €5m to Swiss Rolex, from whom it had allegedly ordered 2,000 wristwatches with the engraving “donated by Kim Il-sung”.

“North Korea had expected to pay their foreign debts with deliveries of copper and zinc,” the Swedish newspaper Dagens Nyheter wrote in 1976, referring to the reserves the imported mining equipment was supposed to unlock. “But the North Korean economists had been too optimistic in their calculations, and the international market price for these ores had also dropped ­catastrophically.”