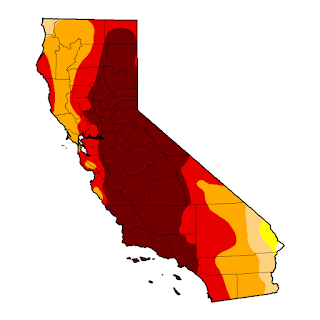 The very word "drought" should be a clarion call for change - we cannot live on this planet and just rely on minerals and fossil fuels - we need water more than anything else.

Japan has plenty of rains - this time of year we have the tsuyu, rainy season - and it comes with abundant wonderful storms, and the rice paddies do well, and my veggies are (mostly) happy.

Not so great in North Korea, or parts of Australia, or California...

The historic drought has dredged up old feuds over who can lay claim to water in a thirsty state. As the powerful lobby for the agricultural industry—which currently consumes 80% of California's water supply—cries for more water to be pumped to their farms in the arid regions of the Central Valley, just who would be left high and dry? (And don't miss the latest drought news at the Thirsty Thursdays blog series.)

Homes with boathouses built around an artificial lake are seen in Indio, California, April 13, 2015.
California's cities and towns would be required to cut their water usage by up to 35 percent or face steep fines under proposed new rules, the state's first-ever mandatory cutbacks in urban water use as the state enters its fourth year of severe drought.

And there is the official data, too:

So, how bad is it really?

In this five-part series by CBS13’s Nick Janes, he explores a few of the many severe changes happening in California as a result of the years-long drought.
Part 1: A Sinking Feeling In The San Joaquin Valley
A problem caused by the drought is literally causing thousands of square miles of land to sink, and it will affect all of us permanently. This problem is happening out of sight, but hardly out of mind.
Read the full story
Part 2: People Without Water In Tulare County
There are plenty of us worried about us saving our lawns in this drought. But for hundreds of Californians, the situation is much more dire. They have no water at all. We track a little farther south of Merced to Tulare County, where we find the hardest-hit area in the entire state.
Read the full story
Part 3: Farmers Coming Up Dry In Costly Search For Water
Drilling for water, farmers are racing to find ways to save their crops in the face of severe water-delivery cutbacks. Some farmers say this is the toughest challenge of their lives. In Butte County, we meet a farmer whose family has been in the business since the 1800s. He says he is doing every thing he can to save every last drop of water — and in the process, save his family farm.
Read the full story
Part 4: Bay Area Company Pulls Water From Thin Air
It’s drought-busting technology that sounds so futuristic, it’s right out of Star Wars. Luke Skywalker’s aunt and uncle in “Star Wars: Episode IV A New Hope” ran a moisture farm where they would draw moisture from the arid climate of Tatooine with moisture vaporators. Nearly 40 years after that movie was released, a Bay Area company is making something similar called atmospheric water generators.
Read the full story
Part 5: Lessons Learned From The Land Down Under
High above the suffering Sierra snowpack, Rich DeHaven captured an eye-opening perspective in California’s drought. Where snow that makes up one-third of California’s water should be just isn’t there. Karelene Maywald, the chair of the Australia National Water Commission, spoke to CBS13 about the devastating millennium drought. California’s four-year drought looks small compared to Australia’s, which stretched from 1995 to 2012.
Read the full story

May rainfall was below average for most of northern Australia except the Top End, the south of Western Australia, southern New South Wales and parts of northern and eastern Victoria, as well as an area of South Australia around and inland of Ceduna and other smaller pockets. Rainfall was above average roughly following the path of a northwest cloudband extending from the Pilbara into the interior and northern South Australia, where moderate falls brought some relief of deficiencies. Northwestern New South Wales, much of Tasmania, a region of the east coast in northern New South Wales and southeastern Queensland, and the Top End also received above-average rainfall.
Monthly rainfall over the southeast of South Australia through western Victoria, and across western Tasmania has been below average from August last year (apart from well-above-average January rainfall, and above-average March and May rainfall in Tasmania). Serious or severe rainfall deficiencies have been observed in parts of these regions for various medium-term periods since late 2013. Longer-term deficiencies are also evident for various periods under 2 years duration in much of this region, and deficiencies are also evident over large areas of eastern Australia for periods of about 3 years duration.

But that's just another sunny place that can engage in trade and import food from all over...

Not everyone is so lucky.

SEOUL – North Korea says it has been hit by its worst drought in a century, resulting in extensive damage to agriculture.
The official Korean Central News Agency said the drought has caused about 30 percent of its rice paddies to dry up. Rice plants normally need to be partially submerged in water during the early summer.
“Water level of reservoirs stands at the lowest, while rivers and streams (are) getting dry,” it said in a report Tuesday, adding that the drought was the country’s worst in 100 years.
An official from South Korea’s Unification Ministry, who asked not to be identified because of office rules, said precipitation in North Korea was abnormally low in May. Its production of rice and potatoes could decline by as much as 20 percent compared to average years if the shortage of rainfall extends to early July, he said.

ADVERTISING
KCNA said other crops were being planted in paddy fields in an attempt to reduce the agricultural shortfall.
North Korea suffered a devastating famine during the 1990s that is believed to have killed hundreds of thousands of people. The famine is also believed to have loosened the communist state’s control over the economy by damaging its public food distribution system and paving the way for private economic activity in unofficial markets.


I know I have readers from all kinds of countries and languages - do you have a word for "drought" - as in Swedish there is no such concept.

Japanese, however, has a lot of expressions:

Pandabonium said…
Having spent most of my adult life in Hawaii, I still know of no Hawaiian word for "drought". Hawaiians (polynesians in general) have always been so close to nature that if they experienced a "drought" they would adjust their use of water immediately - by planting a different variety of taro for example that needed less water.

However, during my time there, it became apparent that the use of water from wells drilled deep into the fresh water aquifers of Maui were being drawn down faster than nature could replenish them. Most of this was to support new housing for American immigrants (such as myself at the time) and especially for hotels and their associated golf courses, which were often located on the sunny leeward/dry side of the island.

The problem persists in Hawaii. An excellent website for information on the situation of the Island of Maui is "Maui Tomorrow". They had an excellent post on the subject of water last year entitled "Maui’s Aquifers and Their Sustainable Yields". URL - http://maui-tomorrow.org/category/wai/water-studies-data/

Astonishing to realize that even Hawaii which is located in the center of the Pacific Ocean and receives over 1600 mm of rain per year (nearly 64 inches), over-uses that ample resource by a wide margin! If we can't live sustainably in the wettest state in the so-called union, where on earth can we?