June 28, 2015
June has been an interesting month with some wonderful rain and not-too-hot temperatures, mostly. I thought I should try to revive this "Eco Links of the Month" idea I foolishly started a while back. Do suggest news or blog posts that you think I should cover here on Kurashi - 10 years of blogging, no less! 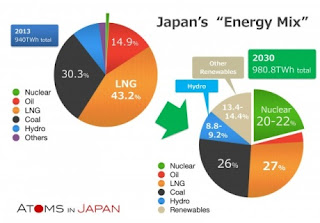 A plan setting a share of 20% to 22% for nuclear power in Japan's energy mix by 2030 has been approved by a consultative committee. While scaling back fossil fuel use, the plan also calls for an expansion of renewable energy sources.

The long-term energy supply and demand outlook subcommittee of the Advisory Committee on Energy and Natural Resources approved the draft report on 1 June.

In 2013, LNG accounted for 43.2% of Japan's power generation, with 30.3% coming from coal and 14.9% from oil. Nuclear accounted for just 1.7%, with the remainder coming from renewable sources, according to figures from the Japan Atomic Industrial Forum (JAIF).

Friends of the Earth Japan and many other NGOs are strongly opposed to the continued reliance on nuclear power:


As most of my readers here probably know, I work for Consumers Union of Japan, and we held the 42nd Annual Meeting on June 20, adopting 4 resolutions, including this one about nuclear energy:


2) We oppose the continued reliance on nuclear power

After the March 11, 2011 nuclear disaster at TEPCO’s Fukushima Daiichi Nuclear Power Plant, it became clear that relying on nuclear power is a dead end for society. In spite of this, the Abe Cabinet announced its new energy policy in April, 2015, stating that Japan should continue to rely on nuclear power, defining it as an “important base-load power source,” and sticking to its policy of promoting the nuclear fuel cycle. The government is already set to approve the restart of the Sendai and Takahama Nuclear Plants, and is making efforts to export nuclear power technology to other countries.

Meanwhile, in Fukushima Prefecture, some 120,000 people are still unable to return to their homes near the site of the crippled Fukushima Daiichi Nuclear Plant. We note that it was a man-made disaster, and that the melted-down reactors still emit over 320 tons of radioactive water every day as they must be kept cool. Efforts to create a frozen wall around the complex failed. Also, workers on the site are being exposed to radiation in a perfunctory and careless way by the management. This is a clear human rights violation. In January, the government and TEPCO suggested that radioactive water should be disposed of into the ocean, something we cannot accept.

The Japanese archipelago with its active volcanos and many frequent earthquakes is particularly unsuitable for nuclear power. When accidents occur, radioactive substances will be released into the environment, with radioactive fallout including plutonium. Spent nuclear fuel also cannot be reprocessed without creating plutonium, and so far Japan has created 47 tons of this extremely dangerous radioactive material which can be used in nuclear weapons. The “deathly ash” (highly radioactive waste) has a half-life of 10,000 years. Also, mining for uranium is fraught with danger. All this points to a collusion of lies and cover-ups to make continued operation possible, as the basic truth is that radioactive substances can never coexist with living beings.

At the moment, not a single nuclear reactor is in operation in Japan. Even so, we basically have sufficient electricity. Higher costs for electricity seem to be the only reason to restart the currently idle nuclear power plants. We support independent efforts to save energy and reduce energy consumption for a peaceful livelihood for everyone, including for future generations. We look forward to a society that wisely relies on natural, renewable energy based on the “local production, local consumption” principle for all the people in the world, with zero reliance on nuclear power.

Do follow the ongoing commentary about Okinawa over at Ten Thousand Things:

The Sense of Sacred: Mauna Kea, Hawai'i and Oura Bay, Okinawa
This interview is from China Dialogue, a blog with news in both English and Chinese about the environmental crisis in China, and what is being done to combat it:

Peng Gong: The health impacts of the use of coal and transport fuels have been well documented, although perhaps more so in prosperous cities than the poorer, mainly rural hinterlands where many coal-fired power stations and mines are built. The consequences of fossil fuel use on the climate will mean increasing extremes in weather, which will mainly be felt in poor rural areas. China’s leadership is fully aware of the health aspects and comments from the country’s top meteorologist earlier this year warned of serious impacts on natural resources. Climate change could mean that scarce water supplies dwindle more rapidly, while searing heat and increased likelihood of floods will impact crop yields and the productivity of rural workers. Climate change could also speed up the huge wave of rural migration to cities, many of which are increasingly vulnerable to rising sea levels. Although it should be said, in the event of a warmer world, rural China – with its own risks of flooding and is less equipped to deal with extremes of temperatures – may be more a dangerous place to be than urban areas. (...) 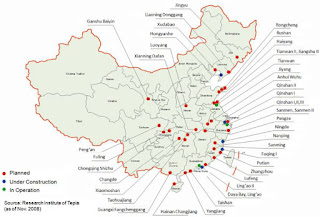 Speaking of China, did you know they put plans for new nuclear plants on hold after the Fukushima disaster in 2011? Now, it seems they are about to change their collective minds again. But one critic, who is 88 years old, thinks differently:


He Zuoxiu, a leading Chinese scientist, says the country is not investing enough in safety controls after lifting of post-Fukushima disaster reactor ban

China’s plans for a rapid expansion of nuclear power plants are “insane” because the country is not investing enough in safety controls, a leading Chinese scientist has warned.
Proposals to build plants inland, as China ends a moratorium on new generators imposed after the Fukushima disaster in March 2011, are particularly risky, the physicist He Zuoxiu said, because if there was an accident it could contaminate rivers that hundreds of millions of people rely on for water and taint groundwater supplies to vast swathes of important farmlands. China halted the approval of new reactors in 2011 in order to review its safety standards, but gave the go-ahead in March for two units, part of an attempt to surpass Japan’s nuclear-generating capacity by 2020 and become the world’s biggest user of nuclear power a decade later. (...)

Pandabonium said…
Of course, nuclear energy relies upon fossil fuels for its existence. Fossil fuels powers the mining, refining, transportation, and processing of nuclear fuel. And it was loss of fossil fuel powered generators that was the proximate cause of the Fukushima meltdowns.

We still have electricity because of the huge increase in the use of LNG which went up by 23 percent. Meanwhile, the cost of LNG nearly doubled. (according to the National Bureau of Asian Research in the USA). Cost is the motive, IMO, for wanting to cut into LNG use. Well, that and international politics.

LNG has very serious and immediate impacts on us including everyday air quality and climate change. I support cutting back all uses of fossil fuel, including oil, coal, and LNG, along with nuclear power.

Unfortunately, solar and wind, like nuclear power, rely upon the existing fossil fuel infrastructure for their existence. Spending fossil fuel to build out whatever renewable energy plants are possible (if done carefully) will help to bridge the gap between today's energy mix and the inevitably much smaller energy mix of the future, while lessening the health and climate impacts of our energy use.

Martin J Frid said…
P, thanks a lot for the comment, I know you have been thinking deeply about these issues for a long time. As you suggest, we should use this small window of opportunity to use fossil fuels as a bridge - indeed many bridges - to a different future.
9:15 pm, July 02, 2015