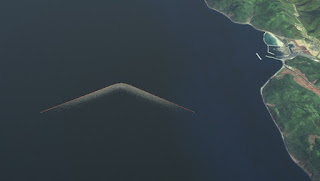 Have you heard of the plastic garbage in the oceans? Well, 20 year old Boyan Slat is trying to do something about it, and he is getting support to do it in Japan.

May 20, 2015 he and his crew started a project near Tsushima Island, to try to capture some of the crap left by humans in our seas. If this works out, the plan is to scale it up.

The ocean currents, passing the island towards the deposits around 30,000 m3 of trash onto its shores every year. Currently, this garbage is manually collected, costing about US$5 million each year. The coastal pilot will be catching trash before it reaches the shoreline, potentially saving cost.

This, combined with the suitable wave/current conditions and the local hospitality, makes Tsushima the perfect testing location.

This will get interesting. Tsushima is part of Nagasaki, Kyushu and a major tourist destination. Go out on the beaches and you can't avoid seeing the plastic crap washed ashore.

Very embarrassing then, if that plastic garbage has Japanese or Korean or Chinese or other origins? Well, that is not the point. Crap is crap. Why does it end up in our wonderful oceans? Most of us try to take care of our garbage... right?

Recycle, Reduce, - Refuse to use stuff that may end up in your kitchen sink, then into rivers, and finally into oceans.

On May 20, The Ocean Cleanup and the city government of Tsushima (a Japanese island which lies between Japan and Korea) jointly agreed to conduct research to bring the world’s first ocean cleanup array to Tsushima Island.


The system will span 2000 meters, thereby becoming the longest floating structure ever deployed in the ocean (beating the current record of 1000 m held by the Tokyo Mega-Float). It will be operational for at least two years, catching plastic pollution before it reaches the shores of the proposed deployment location of Tsushima island.

Tsushima island is evaluating whether the plastic can be used as an alternative energy source.

The scale of the plastic pollution problem, whereby in the case of Tsushima island, approximately one cubic meter of pollution per person is washed up each year, has led the Japanese the local government to seek innovative solutions to the problem.

Will it be possible to use this simple idea?


Boyan Slat, founder and CEO of The Ocean Cleanup:

“When you want to clean the oceans, it is important to know how much plastic is out there. Right now, estimates vary orders of magnitude, due to the small amount of measurements, which furthermore have been taken over very long period. The Mega Expedition will allow us to produce the first-ever high- resolution estimate of the amount of plastic inside the Great Pacific Garbage Patch and we are grateful for the Mayor’s and Transpac’s support. This enables us to continue preparing the passive cleanup technology for our first ocean pilot, taking place in the first half of 2016.”

About 8 million tons of plastic enters the ocean each year (Jambeck et al., 2015). Part of this accumulates in 5 areas where currents converge: the gyres. At least 5.25 trillion pieces of plastic are currently in the oceans (Eriksen et al., 2014), a third of which is concentrated in the infamous Great Pacific Garbage Patch (Cózar et al., 2014).