Kurashi Review: Children Of The Tsunami By Patrick Sherriff 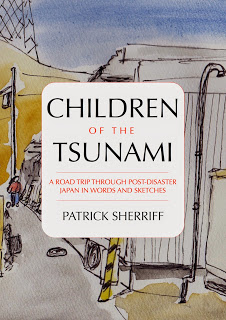 It's not journalism, not fiction, and certainly not your usual travel book. Patrick Sherriff has written an acute account of his recent trip to the coastal areas devastated by the earthquake and tsunami in 2011. Add watercolours and you have a great little book that helped me remember that there is still a world up there, a couple of hours north of the comfort zone that is Tokyo, that hasn't recovered, but the people are doing their very best to cope.

Children of the Tsunami is an e-book, easy to order for $0.99 or an oversize paperback at $6.99 from all Amazon sites including here at Amazon.com. Amazon.co.jp and Amazon.co.uk, or get the paperback directly from CreateSpace. You can also sign up for Patrick's mailinglist (details below).

Background - Patrick drove up in 2011 with emergency supplies, like many of us did, trying to help wherever we had contacts or the need was the greatest. Now, he went back on a more leisurely trip, with wife and two daughters, to reconnect with some of those people. Some are gone, some going (young people getting jobs or scholarships to universities elsewhere).  Children of the Tsunami is not adding a lot of emotional baggage, no dwelling on the pain. Casually, with a lot of respect, Patrick notes how husbands who lost their wives carry on, and others make do with the housing provided, or wondering how their old towns may one day emerge, again. If this is prose, it is almost poetry, at least if you have been up there. His style kind of reminds me of the rocks out there in the Pacific... Again, the watercolours help me remember how amazingly beautiful the Tohoku coastline is. And why some people elect to stay.

Much recommended, Kurashi readers (some of you who helped by donating to my own 2011 trips - again, thanks).

I asked Patrick Sherriff a couple of questions, and here is the conversation:

Q1: In my case, nothing prepared me for the devastation. You mention WW2 and for most of us, that may be the only real sense of the scale of destruction. Could you say a little bit more about that first trip you did?

Patrick: Yes, it was quite shocking, wasn't it? I think it was the contrast between the comfort levels of us here in the Tokyo area compared to the destruction all around the coasts of Iwate and Miyagi was perhaps the most jarring. But at the same time what is in front of you seems unreal; everything has been interpreted for you ahead of time by endless TV coverage, so when you actually meet ordinary people they have achieved mythic status as plucky, stoic "survivors". It takes a while to realise that they are normal and ordinary, as are we all, just having to deal with more shit than most of us ever have to.

Q2: I heard a Japanese lady in Miyagi prefecture say, in a very philosophical way, “We took a lot from the ocean over the years, fishing and the like, and of course the ocean took a lot from us…” Did you get any sense of that? Do you think the high school kids that you describe in the book have gotten any support, in the psychological, clinical sense? Is there any therapy available? Or is everyone just left to their own devices?

Patrick: I've heard anecdotally of support, my wife knows a counsellor who has devoted her free time to offering support to survivors, but I'm not in a position to say how widespread that help might be. I don't think any of the teenagers I met received formal psychological help, but I didn't ask. Some received generous scholarships based on their status as survivors. Philosophically, it's hard to generalize on how people cope with disaster. One thing I was surprised about was two teens talking about wanting to go surfing. I'd have thought the sea would have been ruined forever as a source of joy, but for them, evidently not.

Q3: Your book is more about the tsunami than the nuclear disaster. Fukushima gets a lot of attention, meanwhile, the entire coastal area is mostly ignored (except maybe by NHK). Do people talk about that? 4 years later, is there any sense that the tsunami is the “forgotten” crisis?

Patrick: I did detect a little bitterness from one chap I met over the attention and money that the Tokyo Olympics is attracting compared to reconstruction of Kesennuma. I don't think any of the survivors I met begrudge the attention Fukushima has garnered, but I didn't ask that specifically.

Q4: Any thoughts about e-publishing and the merits/demerits? How could the web get better at helping authors publish? What do you think is the future of this way of getting independent voices heard (and seen) and - any cautionary tales?

Patrick: I'm a bit of a ideologue when it comes to e-publishing and self-publishing (they are related but different animals). In a nutshell, there are no gatekeepers in publishing anymore. If you want to publish a book, you can, on almost your own terms. E-books democratize the process by removing the cost barrier and distribution problem. I recommend Let's Get Digital by David Guaghran if anyone want to know the basics of e-publishing. The difficulty is getting your book noticed, but that is true of traditionally published work too. The bottom line is that there has never been a better time to be a writer. You have a story to tell? Tell it. Nobody is stopping you but yourself. As far as cautionary tales go, get yourself an email subscription list, it's slow-growing but the best way to forge an independent link with readers. Mine is here: www.patricksherriff.com/newsletter

Q5: Anything else you wish you had mentioned in the book? Anything you left out, last minute? Anything your wife told you to leave out…?

Patrick: I said an awful lot that I ended up cutting out because it was my own opinionated bullshit, the classic too much "tell", not enough "show", that fiction writers are always warned about. I'm happy with the final product. It is an accurate version of what I know and want to say. And I've received a fair bit of praise for my ink and watercolour sketches which I was on two minds about including. My wife said she liked the book, so I chalk it up as a success.
books Earthquake Fukushima Miyagi Tsunami

People need to adjust their livelihoods after a catastrophe. Perhaps rethink living by taking from the sea for example.

Japan has some political and social problems that need to be addressed. Go back to more local interdependence and less reliance on the central government. Why so long for housing for affected areas for example? Totally unnecessary IMHO.

When I first came to Japan in 2004 there was an earthquake in Nagano. I remember people stranded in a shelter (a school gymnasium as I recall) without food or water. Later they found out that the food and water was there, but no one knew it at the time!

I urge everyone to prepare for such emergencies = as individuals, families and communities. My missus thought me a bit of a nut, but I stocked food, water, emergency lights, etc. for years. When the Tohoku earthquake hit, we were without water and power for some days, but were able to get by without much discomfort. Suddenly, I went from "nutter" to "hero" in her eyes. It surprises me that this nation, which has endured so much from natural disasters and war is still so unprepared at the local level to deal with emergency situations. I remember giving a loaf of homemade bread to a neighbor after the Tohoku quake and they were totally non-plused by even such a simple gesture which seemed only the natural thing to do at the time.

Yes, we have prefectural drills every year with fire, medical, and rescue (at least here in Ibaraki we do) but nothing happens at the local city or neighborhood level to prepare for things we know are certain to happen at some point in the future. Faith in the national government? Pride? Denial? I don't know why it is, but it needs to change.
5:49 pm, June 19, 2015 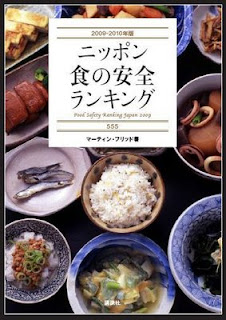