Most of our gadgets work in mysterious ways, that our high school science teachers didn't prepare us for (or we didn't pay attention). Remember the Periodic Table?

If you have been wondering what "rare earths" are, it may be useful to go back to Chemistry or Physics 101. Or even better, use google or yahoo for something useful, for a change!

Sorry if that sounds patronizing. I liked Mutant Frog's post called Breakin’ Supply: Electric Boogaloo but The Japan Times was unusually informative today, 1-0 to print media. In addition to the usual US perspective, Hiroko Nakata also has the details about Japan's dealings with Kazakhstan to secure a steady supply of these important metals:

Meanwhile, the industry ministers of Japan and Kazakhstan confirmed Wednesday that the two countries will cooperate on production of rare earth elements in central Asia. In March, Sumitomo Corp. signed a deal with Kazakhstan's national nuclear power company Kazatomprom to form a joint venture and produce rare earth metals in the country, including neodymium and dysprosium, which are crucial to building motors for electric vehicles. Toshiba Corp. said it signed up with the same Kazakhstan firm in June to establish a joint venture to produce rare earth metals coming out of uranium mines in which Toshiba has a financial interest. The electronics maker said it hopes to set up the venture by the end of the year and start producing rare earth elements used in motor magnets.

There are also deals with Vietnam, and others. Japan may bring the matter to the World Trade Organization, but Beijing has denied issuing any orders to stop exports to Japan. Clearly, Japan is preparing to be less dependent on China, and we can all continue buying mobile phones, iPods, Toyota Hybrids, Honda Insight, and whatever. Consumers could also reduce their spending on gadgets, and thus contribute to less international tension about these matters.

China has a lot of cheap labour, and while rare earths are not exactly "rare," they are difficult to make from ordinary dirt, where they may be present in very tiny quantities. Deng Xiaoping, apparently, made it a priority that China would master the development and production of these metals a generation ago, according to Bloomberg, with retired officials from the US Defense Department quoted on the record as saying that "The Pentagon has been incredibly negligent..." 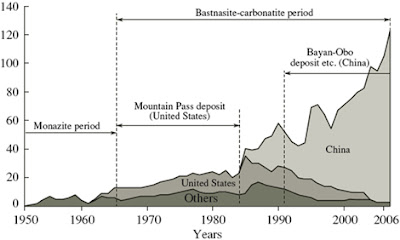 Great. Why don't the Chinese simply stop selling all these dangerous metals, so we can rid the planet of weapons of mass destruction...?

If you don't immediately remember what stuff like neodymium or dysprosium may be, I recommend the following blog, Economic Science Community.


Their post in June, 2010 has the title Rare Earth Crossroads:

Before turning to those questions about China, here’s a quick tutorial on rare earths and their uses:

Rhenium, the newest element on the periodic table (1925), is a vital component in super-alloys of steel that withstand very high temperatures, greatly extending the durability and fuel-economy of jet engines, rocket engines, and camera flashes. Paired with platinum, rhenium is a catalyst in the production of un-leaded gasoline.

Samarium, also used to make magnets, is a filament in carbon-arc lighting (used in movie production), and it appears in nuclear reactors, lasers, optical glass, as a catalyst in ethanol production, and in a bone-cancer drug called Quadramet.

Erbium is a doping agent in fiber optic lines -- it boosts signal strength, similar to the way a compressor to a gas or oil pipeline to boost flow speed. An erbium and ytterbium compound is used in welding torches, having largely replaced carbon dioxide-based cutting lasers.

Europium, one of the first rare earths to be used commercially, created “red” in early color television sets and does so still in flat screen monitors of all kinds. In fact, demand for colorization of television triggered much of the research and development of rare earths and indirectly to all the applications mentioned above. Thank you, television.

The other rare earths – cerium, dysprosium, gadolinium, holmium, lanthanum, lutetium, praseodymium, promethium, scandium, terbium, thulium, and yttrium -- are used in some of the applications above, to color or polish glass or ceramics, or in lighting applications (lasers, lamp filaments, etc.).

Japan has a Rare Earth Society but you would expect more on that website, considering how important these metals and elements are to Japan's economy.

The photo from Bloomberg is interesting, it comes from a factory that proudly displays a quote by Deng Xiaoping, stating, "The Middle East has oil, China has rare earths."

The Periodic Table is credited to Russian chemist Dmitri Mendeleev in 1869, who intended the table to illustrate recurring ("periodic") trends in the properties of the elements.

Back to high school: What I do remember about these metals and elements is that many of them were discovered and named by Swedish researchers (from wikipedia):

Lanthanum was discovered in 1839 by Swedish chemist Carl Gustav Mosander, when he partially decomposed a sample of cerium nitrate by heating and treating the resulting salt with dilute nitric acid. From the resulting solution, he isolated a new rare earth he called lantana.

Lars Fredrik Nilson found a new element in the minerals euxenite and gadolinite from Scandinavia. He was able to prepare 2 gram of scandium oxide of high purity. He named it scandium, from the Latin Scandia meaning "Scandinavia".

In 1787, Carl Axel Arrhenius found a new mineral near Ytterby in Sweden and named it ytterbite, after the village. Johan Gadolin discovered yttrium's oxide in Arrhenius' sample in 1789, and Anders Gustaf Ekeberg named the new oxide yttria. (Europium oxide is widely used as a red phosphor in television sets and fluorescent lamps, and as an activator for yttrium-based phosphors.)

So, dear readers of Kurashi, who are more used to me and others going on and on about biological diversity, food and ag issues, peace, oil supply concerns, and other fun topics (including lithium for the batteries in hybrid cars), aren't you glad you asked, "What on earth are rare earths?"
China politics progress Rare earths reduce