Nissan Leaf In The News In Europe: Car Of The Year, Post Peak 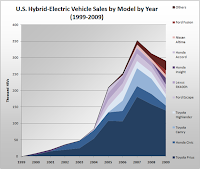 I don't own a car and do not plan to buy one, especially considering the economic situation we face, which is really a global bubble bust, and if you are lucky, you live in a country that still has a banking system. I take the trains and walk a lot. If I was in great need of a car, what would I do? (Again, not a scenario that is on the radar)

In the midst of all the news from Europe about huge risks that the Euro Zone may collapse, and what will the Germans do after the Irish bailout, with worries about Spain (and others), how is this for some "good" news:

The Telegraph: Nissan Leaf wins Car of the Year

I find it ironic that mass media is still so caught up in the car craze. I understand that a lot of people live in places where they really, really need a car to get to work or do whatever they have to do. But that is about to change. Gasoline is not to be taken for granted, not at reasonable prices. We are now living in the post peak era.

As for electric cars, well, The Nissan Leaf has some very clever engineering, but where is the infrastructure? How many nuclear power plants would we really need to shift to all-electric cars? Let's be honest, this is not the solution. Having 500-800 cars per 1000 people is not possible.

How are the hybrid cars doing, so far?

OK, I was wrong about the SUVs, there is one that sold a lot. I wonder if the people who buy this vehicle actually think it is good for the environment, or not.

Data from wikipedia: Hybrid electric vehicles in the United States

This is just so pitiful, in spite of all the energy saving that it promises, as global car production annually is in the 40 million to 50 million vehicles zone, with a peak in 2007.

Wow! What a website! The International Organization of Motor Vehicle Manufacturers really cares about CO2 emissions and wants you to drive sustainably! ECO-drive! And there is a call for a new paradigm for the global auto industry! And they know all about it!

If I was on a city council, wondering what to do, I would vote for something completely different. Transition towns are already trying. I believe more in electric buses. I would support and encourage hybrid taxis, as the drivers would be able to use all their skills to reduce gasoline consumption (did you know that by 2009, 15% of New York's 13,237 taxis in service were hybrids, the most in any city in North America?) and other forms of car ownership such as car sharing - and more bicycles on the roads, yeah! Make your town pedestrian friendly, fast.

The Nissan Leaf will have to do a lot more to convince me that it is not just a part of the problem, but actually a part of the solution. They are ignoring the real picture: Car sales are down, way down. Look at this graph of US car sales (light vehicles) and how it has gone from on average 15-17 million cars per year to about 10.38 million (still too much in my humble opinion). 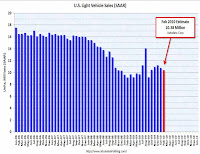 Over the last 60 years, anti-urban policies have resulted in an energy-sucking, emissions-spewing U.S. Edward L. Glaeser, a professor of economics at Harvard University, points to subsidization of highways and home ownership as deliberate policy choices that have bled cities and encouraged a suburban and exurban infrastructure – one that is dependent on high levels of energy inputs (resulting in emissions outputs) both for transportation and to power buildings.

Glaeser cites studies that find each new federally-funded highway passing through a central city reduces its population by about 18%. Cities don’t benefit much from that highway infrastructure because dense areas already have good means of getting around – like walking.

Pandabonium said…
Too little, too late.

The days of "happy motoring" are all but over. Mr. Obama should have gone for rail rather than bail out the auto industry. All that money for building cars and roads and airports is throwing good money (or rather debt) at forms of transportation that have no future past.
8:11 pm, December 01, 2010

Martin J Frid said…
Thanks, great insights. I agree that "happy motoring" is all over, but from what I see around me, few drivers seem to mind (I almost got run over today by one, who seemed to think a pedestrian crossing is a great place to inch forward into a left-turn in an intersection).

It is depressing to see that so few people are choosing energy-savvy vehicles. That will be bad for the banks that provide the loans.

I'd say, for good measure, that a lot more people are now finding other ways to commute to work and leaving the car behind. The general decline in car sales is very good news, as far as I am concerned!
10:16 pm, December 02, 2010

Pandabonium said…
Regarding commutes, another way to approach the transportation problem is localize economics so that people live closer to work, shops, and services, and don't need to commute by car or train or bus. Since so much has been invested in the current layout of things, that will take time - something that is also in short supply.
10:30 am, December 03, 2010

Unknown said…
These blogs are valuable because these are providing such informative information for all the people.
Find Car Tyres For NISSAN Vehicles
9:57 pm, August 20, 2013

Unknown said…
Your article is informative and it is great news for me to know that the Nissan Leaf has won the car of the year award of 2010. I hope that it will also gain it in the current year.
auto transport quotes
7:56 pm, August 30, 2013