November 28, 2010
Forests, left alone, are amazing places. This 1972 movie, Silent Running, tried to tell people how precious they are.

On this planet, we think we can just go in and make profit, cutting down trees, selling the wood elsewhere. I vividly remember my parents had a small mahogany table, bought in the late 1960s:

It has a reddish-brown color, which darkens over time, and displays a reddish sheen when polished. It has excellent workability, and is very durable. Historically, the tree's girth allowed for wide boards from traditional mahogany species. These properties make it a favourable wood for crafting cabinets and furniture.

A wide variety of electric guitars are also made with mahogany, notably the famous Gibson Les Paul, which uses a sandwiched body with a maple cap over a mahogany core. The tighter grain of maple generally yields a brighter tone, the combination of woods produce a warm, rounded tone with great sustain, as well as weight, for which the guitar is famous.

Turns out, Gibson was raided by FBI back a year ago,

No charges have yet to be filed.

Gibson officials said they're cooperating with Fish and Wildlife agents on the investigation.

They released this statement:
"Gibson is a chain of custody certified buyer who purchases wood from legal suppliers who are to follow all standards . . . Gibson Guitar Chairman and CEO sit on the board of the Rainforest Alliance and take the issue of certification very seriously." 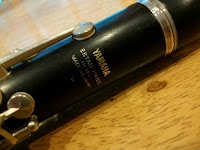 As a matter of fact, forests are a part of farming, as we need the broad leaves and the compost for healthy farms. This also helps rivers and the areas around river basins. Unless you care about local forests, you will need to import your PK fertilizers, or you will have difficulties.

Silent Running is an amazing film.

I am rather interested in how Yamaha, a major musical instrument maker in Japan, deals with such issues.

Deep connections with trees, initiatives as it aims to create a sustainable society...

Yamaha notes: The decline of timber resourses makes it more difficult each year to stably aquire the wood materials needed for musical instruments...

And if you read carefully, they are now trying to plant trees in Shizuoka, Japan and in Indonesia.
Biodiversity Music sustainability

Pandabonium said…
This post reminds me of the saga of sandalwood (and other trees) in Hawaii and on many other Pacific islands.

We must change the economic paradigm and with it the value placed on "our" scarce "resources". Which really means we must re-examine the meanings of the words I put in quotes above.
10:32 pm, November 28, 2010