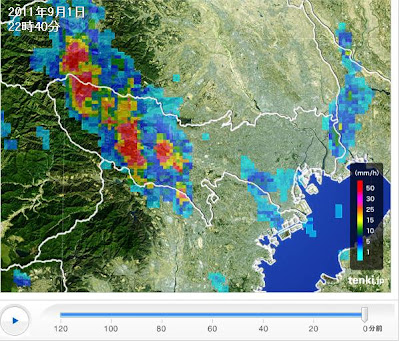 Tomorrow Friday: just another typhoon over Tokyo and trains may not be running as usual. Not something we worry a whole lot about here, but still, it has been a busy summer, after the horrific spring.

When people get delayed by train services in Tokyo, they get a printed slip from the train line as they exit. It explains the reason for the delay. When arriving late to the office, this slip helps people feel less stressed about the problem, and as delays are infrequent, companies accept such slips. A wonderful token that makes up for the inconvenience of being late.

A typhoon is approaching Tokyo tonight, one of many this time of year. Not an unusual event, yet we all worry in case we get caught in massive 50mm+ rainfall.

Friday should be rather bad. Why not just work from home? Somehow, the old office is still so very important in Japan. A little more flexibility could do miracles for morale. Managers and bosses could just have made it an informal work-at-home day, if someone up higher in the hiarchy had had the bright idea.

Back in 2005 when I was working at Japan Offspring Fund, the Yurakucho line was delayed, and I got one of those slips. As I arrived at the office, then in Kojimachi, everyone smiled and thought I was so very sincere. They had already heard about the train delay, and knew I'd be late. Still, I think the punctuality of the trains in Japan is something special. I like how we can rely on their very best efforts.

If we are going to move away from a society that depends on cars, we need public transportation that delivers. Even when there are typhoons. And if that is impossible, we need people to stay home.

Map from tenki.jp with lots of graphs and services.

I like Nakajima Miyuki's voice a lot, a star from the mid 1990s. This song is "In between the sky and you" and first, you get the karaoke version. Enjoy.

Well, "tears in the rain" comes to mind. The original vocal is here, with a video full of images of sky and clouds...

Nakajima Miyuki, thanks Mari (Sora no Fune with English lyrics) for helping me remember!

Update: A week later, in spite of five days of rain in Tokyo, it was Nara and the Kii peninsula that got the brunt of this typhoon. Over 50 dead and as many still missing due to landslides and flooding. NHK World reports:

As of Wednesday evening, about 470 people remain stranded in Mie, Wakayama and Nara prefectures. The number is growing smaller, as many roads damaged in the storm have been restored. SDF troops are transporting medical staff, food and water to isolated communities.

I will visit Nara this weekend and then go to Koya-san in Wakayama prefecture, just northwest of the worst hit areas. I'm hoping there will be no damage to the ancient temples and that the people are alright.

Tom O said…
That slip is called a 'Shomei' something, think that form of the word means proof of some kind. Of course I got two in two days in my last week of living in Tokyo back then. REALLY saves a lot of problems for everyone.

Shomei or Shoumei (one of the two!) can also mean 'lighting'/illumination as in concert lighting. How do I know that? Himistu desu ;o)