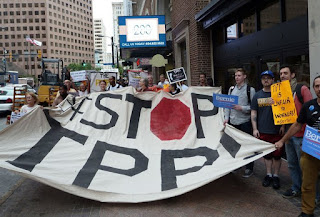 
As I have previously noted here on this humble blog, why do we want a trade pact that allows for more sales of large cars, more milk and more meat, at the same times making it more difficult for countries to regulate medicines?

Shoko Uhida at PARC has the latest updates in Japanese, with more over at @emi_mumemo

Peter Maybarduk, director of a program of the social advocacy group Public Citizen that seeks to expand global access to medicines, called the language put forth by the United States “an illusion, not an improvement. It is a repackaging of the same harmful idea already rejected by many countries.”

Groups of protesters continued on Friday to try to interrupt the closed-door meetings throughout the hotel, shouting “No T.P.P.! No Secrecy!” At least two women were handcuffed and dragged away by security officials.
TPP