October 02, 2007
Today, the South Korean president has arrived to North Korea for talks between the two countries that still technically remain at war since the Korea War.

He will watch the Arirang Festival, mass games of gymnastics and music, that are difficult to describe in words. Have a look at the YouTube video!

My home town in Sweden has a small team of gymnasts, Malmöflickorna, with Swedish girls that have performed internationally since the 1950s. Their photos are rather funny compared to the North Korean seriousness...

Anyway. The South Korean president is under a lot of pressure at home for meeting with Kim Yong-Il, and also for watching the Arirang games, that many feel are a huge propaganda show. However, Chosun Ilbo notes that a South Korean politician compared the Arirang Games to an opera by Verdi! Well, it is true that European culture, such as Verdi's Aida, was used at the time to glorify European colonialism... 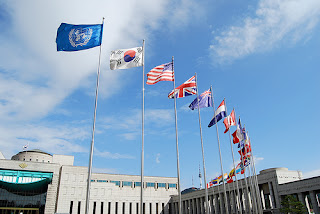 (Photo from Marmot of South Koreas War Memorial in Yongsan, with flags of the nations that participated on the UN side of the Korean War, along with the five nations that sent medical teams (Denmark, India, Italy, Norway, Sweden)
Events Malmö Music North Korea South Korea