The king and the emperor are prepared 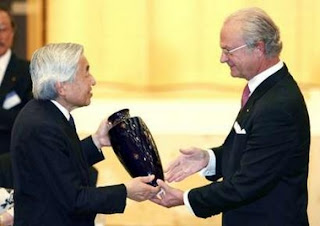 My mother and grandfather were active scouts, but I never caught the bug. Here in Japan you often see groups of kids in their best scouting uniforms, looking very ready and prepared!

Wikipedia notes that the Scouting movement in Japan started in 1909.

Pandabonium said…
Akihito: What is it?

Gustaf: It's a Swedish urn.