Press Release from The Fish 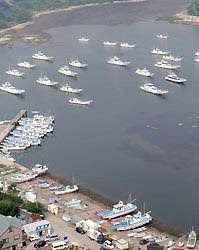 Thanks for giving us a break today.

(Photo from The Mainichi: Boats are pictured at Misaki Port in Miura, Kanagawa Prefecture, as the nationwide fishing suspension takes place on Tuesday)

The National Federation of Fisheries Cooperative Associations said that the estimated going rate of A-type heavy oil used in fishing boats was 115,400 yen per kiloliter, roughly triple the price five years ago. For coastal fishing boats under 20 tons, the cost of fuel accounted for about 23 percent of operating costs in 2006, but recently it has reportedly passed 30 percent.

However, since the price of fish is decided by demand, including bidding at fish markets, it has been difficult to shift the increased costs to fish prices. As a result, the number of fishermen being driven toward operating at a loss is increasing.

Maybe the government should support a more vegetarian lifestyle instead of subsidising an unsustainable fishing industry. How about more subsidies to soybean farming and oil seed production. Tofu, natto, miso - the possibilities are limitless. And while they are at it, why not help farmers go organic.
Food

Pandabonium said…
The government still does not recognize (at least publicly) that oil is a diminishing finite resource. They still act as if the price rises are due to "speculators" and talk of financial packages to ease the burden on fishermen. With that policy, the country will be bankrupt in no time.