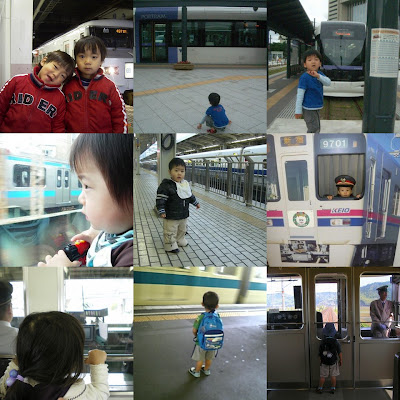 I love trains, always did. Started riding on my own when I was about 9 or 10 (ask my mother). And I never looked back (oh, I had a drivers licence for about a year back when I was 21, but that quickly expired when I moved to Japan). I'm a fan.

Trainspotting here in Japan - you get to see a lot of great engineering displayed on the tracks. Kids love it, and there are otaku who venture out to take photos of the most rare engines.

Here in Tokyo, a new subway line just opened in June, the Fukutoshin line. It is the 13th line, and with that, Japan's capital has over 300 km of subway lines (in addition to regular JR rail tracks, including the Shinkansen). This is a town where parents (ok, mostly fathers) bring their offspring to watch trains on Sundays. Trainspotting. Like it or love it.

Photos found using google, I searched for 電車大好き (densha daisuki) or "I like trains a lot" and made the collage using Picasa - aren't the kids just adorable. 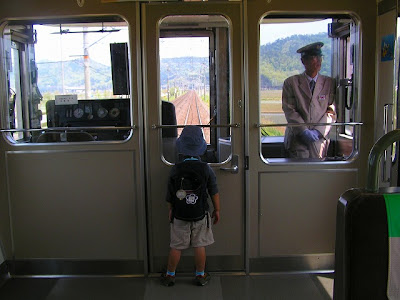 owenandbenjamin said…
Great pictures. I especially like the one with the child looking out the front of the train.
3:46 am, July 18, 2008

Pandabonium said…
Pardon me boy, is that the Chatanooga Choo Choo?

As a pilot I'm partial to airplanes (smaller the better), but I have to admit that for travel I was spoiled by trains during my 1st visit to Japan in 1987 - and ever since. The Shinkansen is the ultimate in my book.

The pics of kids are sweet. I'll have to pull out the picture I took on the train from Fukui to Eiheiji on my trip - 2 school kids with yellow leather backpacks standing by the door as we approached the station. Precious.
6:32 pm, July 21, 2008

vegetablej said…
Though the kids are cute, the picture out the window of the train track and countryside is making my heart beat a little faster. Who knew I would have such nostalgia for the trains, but when I think of my life in Japan it's almost impssible to imagine it without trains.

Sadly, I think I only took a few pictures of the indside/outside of trains when I was there. Your aticle has made me want to look them up. Oh, if only I could be back in Japan for just a few days a month, everything would be perfect. :)
1:30 am, July 23, 2008

Martin J Frid said…
Thanks for the comments, you are all too kind!!

vegetablej, you may want to google a bit or have a look at flickr, there are many nice photos that could cheer you up when you are feeling blue.
12:22 pm, July 23, 2008