Quote of the Day: "After actually seeing the sea at Henoko, he feels more strongly than ever that no base should be built there"

May 14, 2010
NHK reports on the latest from Okinawa's annual peace march started on Friday, one day before the 38th anniversary of the island's reversion from US rule on May 15:

This year, 3,500 people are expected to march in 3 groups on Friday and Saturday, in a bid to draw attention to the campaign by local residents for the return of land currently occupied by US forces.

A kickoff ceremony was held on a beach in Nago City's Henoko district, a candidate site for relocating the US Futenma Air Station.

Nago Mayor Susumu Inamine told the gathering that even 38 years after the reversion to Japan, people's lives are still endangered by the US bases. He voiced disappointment about a government plan to build a base in an area along the beach.

The mayor called on people to act together to force the government to acknowledge that Okinawa doesn't need any more US bases. The participants then began their trek, carrying placards and banners bearing such messages as "no more bases." The group is headed for Ginowan City, which currently hosts the Futenma Air Station.

On Sunday, the marchers plan to form a human chain around the facility. A man from Nara Prefecture said that after actually seeing the sea at Henoko, he feels more strongly than ever that no base should be built there. 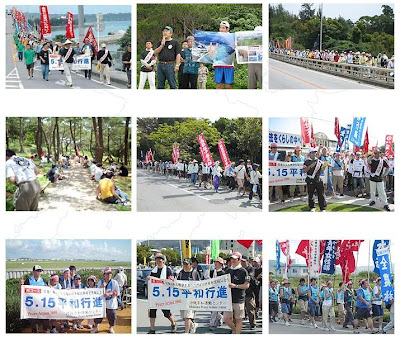