Where Children Can See Totoro: Hirabari Satoyama And COP10

May 10, 2010
Website designer and book binder Takuya Kamibayashi and Hayao Miyazaki (previous post on Kurashi) find similar inspiration in the Hirabari Satoyama. The film director named the forest "Nagoya no Totori no Mori", or 'Totoro's Forest of Nagoya," after he joined the movement to save this wonderland of biodiversity from developers.

Hirabari Satoyma sits in the middle of a residential area, a five minutes walk from a driving school. It measures only 12 hectares, yet holds three rice fields, bamboo forests, zoukibayashi (wooded areas), and three ponds that provide water to three rice fields.

To appeal to COP10 participants (who will come from all over the world to Nagoya in October, 2010 for the UN conference on biological diversity) Takuya is creating a guide to this picturesque site of sustainable farming maintained in harmony with surrounding ecosystems.

This guide will appear as an insert in the next edition of Kyoto Journal: The special issue--one of the few pieces of English print media available to the international and Japanese audience--will be distributed to all COP10 attendees. The goal is to pressure developers to halt their plans that would destroy Hirabari. 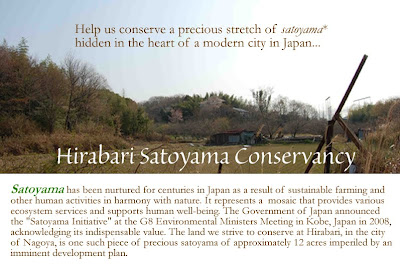 During several trips to the area, Takuya has interviewed local citizens about the importance of Hirabari Satoyama in their lives.

When the city mayor was replaced, the development was put on hold, but last year December, it resumed. What is obvious is there are all the dirty hook-ups in back, and there actually are. With this in my mind, Takuya interviewed Ms. Fujioka, a Nagoya resident, and one of the primary members of Hirabari Satoyama Conservancy.

I asked her, "What do you want to emphasize the most about Hirabari Satoyama to the people who do not know about this place yet?"

She replied, "How fun and how much this Satoyama can offer to the local residents and especially to the kids. This Satoyama ecosystem provides not only a place to run around, but to learn how the nature relates to us. And at Hirabari Satoyama, children don't have to go far from home. They can learn right outside of their rooms."

I answered, "But there seems to be so many wrong things going on behind the scenes. Don't you want to let people know about that also?"

She replied to me that the most important thing about Hirabari Satoyama is what it means to children.

I would also like to mention Masaki Haramura's documentary School of Nature: The Children of Satoyama:

"Children will not grow unless they are put in a risky environment. They will not grow healthily unless they get injured, covered in mud and play rough and physical games," Eijyu Miyazaki says in the film. Haramura examines Miyazaki's iconoclastic pedagogy and its impact at the Kisarazu Community Nursery School in Satoyama, Chiba.

If you are a teacher, do check this: Favourite nature activities for kids in Japan from Education in Japan Community Blog

Japan is still a terrific place for nature observation, despite the concrete jungles having rapidly overtaken most of Japan’s marshes, satoyama landscapes and forests. Thanks to the country’s abundant rainfall, weeds spring up quickly everywhere constituting wayside ecosystems for butterfly stops and other insect habitats. Kids can often be found catching cicadas, beetles, grasshoppers, butterflies and go crayfishing in city parks. 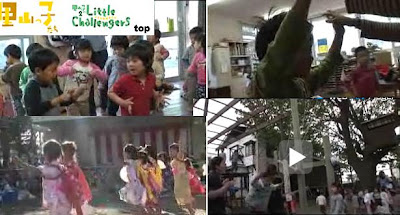 School of Nature, Little Challengers trailer (2:19): The Children of Satoyama

Nagoya is in the global spotlight as the city hosts the United Nations conference on biological diversity, starting on October 18, 2010 - in my opinion a much more important topic than how Toyota, with major factories in the city, will deal with its current crisis. We cannot afford to ignore biological diversity and genetic resources, and the ecosystems involving nature, plants, animals and humans are too complex to rebuild and once they are lost, what will we do about it?

Pandabonium said…
My granddaughters in Hawaii really like the film Totoro.

Kids do need to have the freedom to play "outside" creatively. It seem so much of their time nowadays is structured and "sanitized" and they miss the opportunities of play that connects them with nature and lets them let loose their imaginations and be creative.